Together, they climbed for nonprofit organization U.S. Expeditions and Explorations (USX) to shed light on the uphill battle that veterans experiencing post-traumatic stress and suicidal thoughts face each day. They were the first group of active-duty and combat-wounded service members to make the summit. 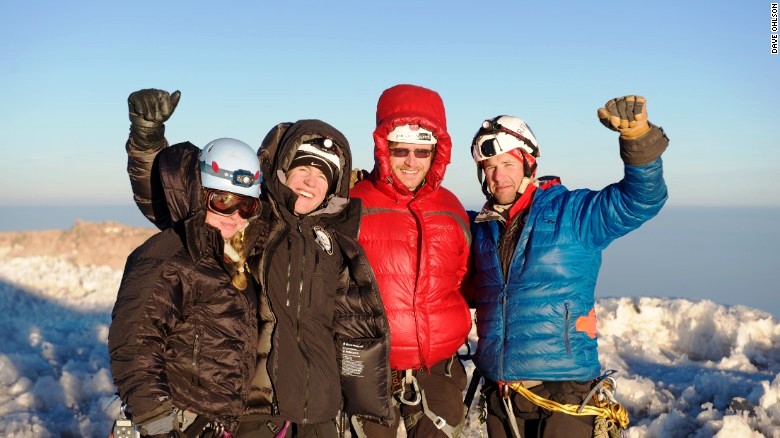 In May, 1st Lt. Elyse Ping Medvigy, 2nd Lt. Harold Earls and retired Staff Sgt. Sergeant Chad Jukes (left to right) will attempt to summit Mount Everest as part of U.S. Expeditions and Explorations to raise awareness for veterans struggling with PTSD and suicide. Capt. Matt Hickey (far right), who participated in a team-building practice climb with them on Mount Rainier in Washington in August, is the CEO of USX and will provide ground support.

Jukes, a single-leg amputee, was striving to be the first combat-wounded veteran to summit Everest. But he was surpassed last week by Marine Staff Sgt. Charlie Linville, whose right leg was amputated below the knee after an improvised explosive blast gravely injured his right foot in Afghanistan. Linville climbed with The Heroes Project, a veterans' organization that leads expeditions with wounded veterans and active-duty service members. He tried to summit twice previously, in 2014 and 2015.

Linville and Jukes don't know each other but were aware they were both eyeing the same goal due to media coverage. Both USX and The Heroes Project chose to summit Everest on the north side, which is less crowded but more technically challenging. 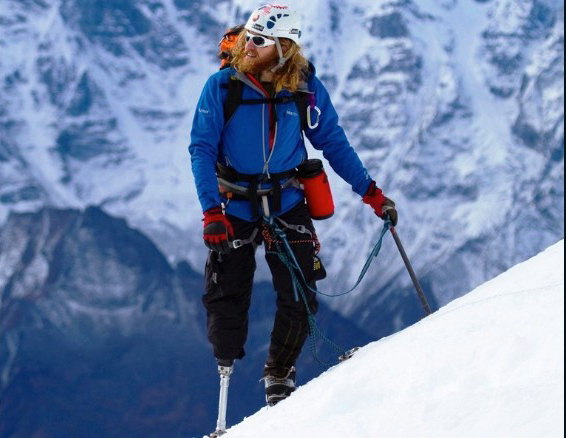 Jukes, a combat-wounded veteran and single-leg amputee, uses a customized prosthetic leg when climbing and biking. His previous mountaineering and ice climbing experience includes frozen Bridal Veil Falls in Telluride, Colorado. He ascended Mount Lobuche, one of the highest peaks in the Himalayas, in 2010 with other veterans through the nonprofit No Barriers USA, which was detailed in the 2012 documentary

Before joining the Army, Jukes pursued rock climbing during high school. During his service, he was a lead gun truck commander on a supply convoy in northern Iraq when his vehicle was struck by an IED on December 17, 2006.

The blast shattered his heel bone and broke his femur. He contracted MRSA in the operating room and it destroyed the many bone fragments in his heel. But anyone who assumed that this would prevent the outdoor enthusiast from scaling a rock face again couldn't be more wrong.

Jukes chose to have his right leg amputated below his knee. A customized prosthesis that could be modified to suit his active interests of climbing and biking gave him hope.

Although he battled waves of PTSD after losing his leg, Jukes found solace and relief through being in nature. Rather than be deterred by his amputation, he started climbing even more, even taking up ice climbing.

Inspired by the first blind man to summit Everest, Erik Weihenmayer, he reached out to the climber. Weihenmayer invited him to climb Bridal Veil Falls in Telluride, Colorado. In the winter, the falls freeze over, forming 365 feet of demanding, steep, overhanging ice. They scaled it together in February 2009.

Jukes also connected with No Barriers USA, a nonprofit that "empowers people to break through barriers, find their inner purpose and contribute their very best to the world." In 2010, Jukes, Weihenmayer and 10 veterans who served in Iraq and Afghanistan and suffered the physical and emotional toll of war set out to climb Mount Lobuche, one of the tallest in the Himalayas. Their story was captured in the 2012 documentary "High Ground." 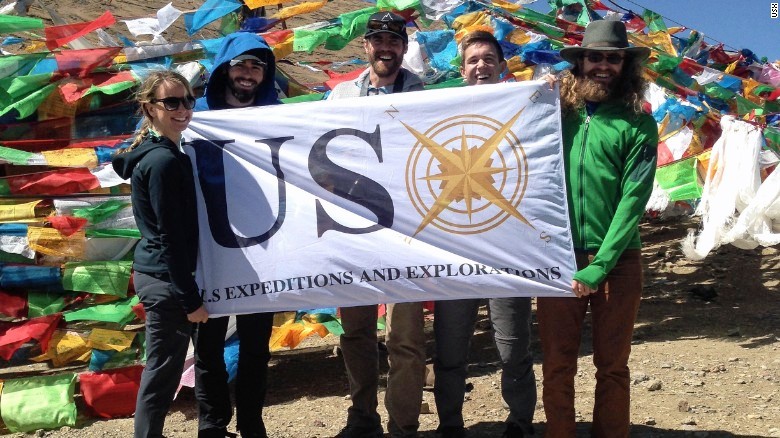 Last year, No Barriers connected Jukes with USX, an organization with the initial goal of having the first active-duty male and female soldiers summit Mount Everest. Jukes agreed, eager to take on the challenge and represent his fellow combat-wounded veterans on the world's highest peak. But he was also motivated by the chance to raise awareness for PTSD, which is an Everest of its own for those who live with it each day.

After climbing Everest, Jukes hopes to teach other people with physical disabilities how to climb because he loves being able to share the challenge of the experience with others.

"Over the past several weeks, our team has been presented with many unique challenges," Jukes said. "Through teamwork and tenacity, we have been able to address and overcome every challenge we've faced." Back to top 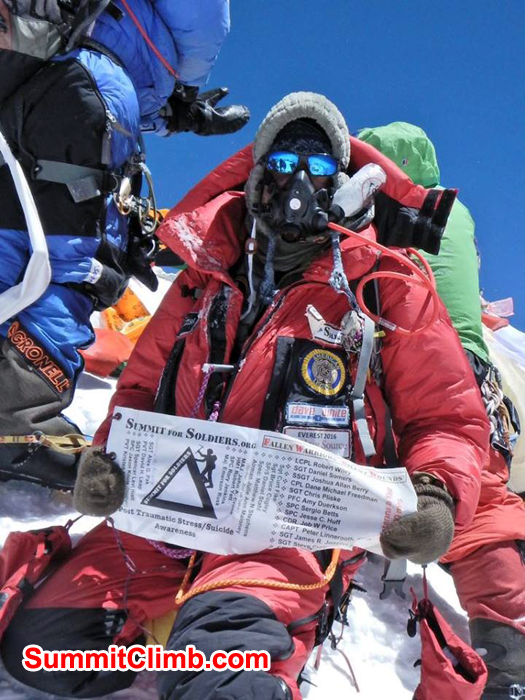 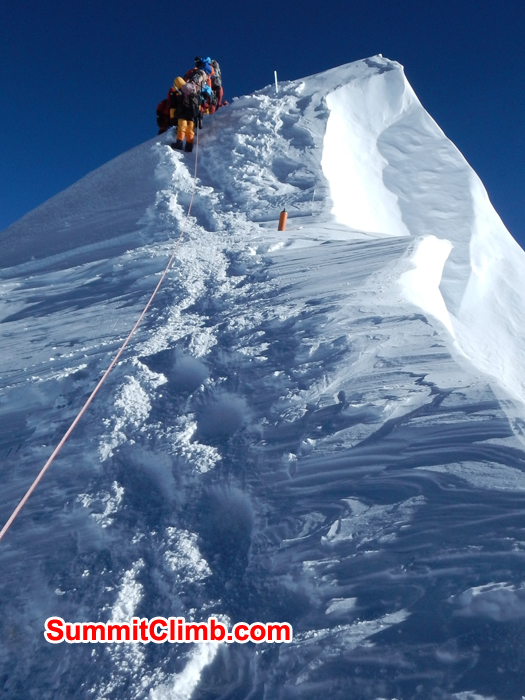 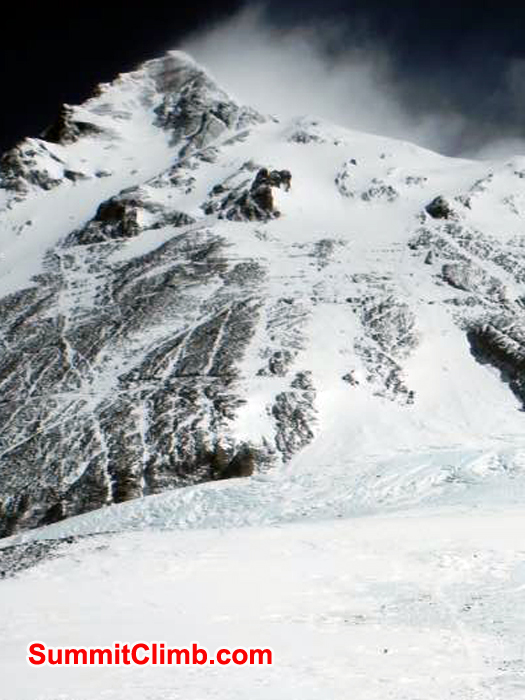 Legionnaire and co-founder of Summit for Soldiers Mike Fairman accomplished what few Americans ever will – he reached the 29,029 summit of Mount Everest.

The former Navy corpsman and an Afghanistan war veteran from Columbus, Ohio, reached the highest point on the planet on May 19 at 11 a.m. Nepal time. Fairman, a member of Legion Post 276, made the ascent wearing The American Legion emblem on his parka. A Summit for Soldiers American Legion team comprised of six Ohio Legion members – Dietrich Stallsworth, Steven Downey, Andrew Oakes, Anna Pelino and Rick Amoros – will depart for Nepal on May 24 to trek to the 17,565-foot Everest Base Camp and deliver supplies to villagers who have endured a major earthquake and a deadly avalanche in the last two years.

Fairman and other post-9/11 era veterans built the growing network called Summit for Soldiers seven years ago, and The American Legion Department of Ohio became a strong supporter this year. The department was the title sponsor of a “R.O.C. for Veterans Music Festival” April 2 in downtown Columbus to promote the expedition and to attract more veterans to the cause. The group’s purpose is to encourage healthy outdoor activity and provide veteran-to-veteran support for those who suffer and may be at risk of post-traumatic stress disorder or suicide. Activities have included winter treks through national parks, bicycle rides, hikes, fishing trips and other experiences in central Ohio and across the country. 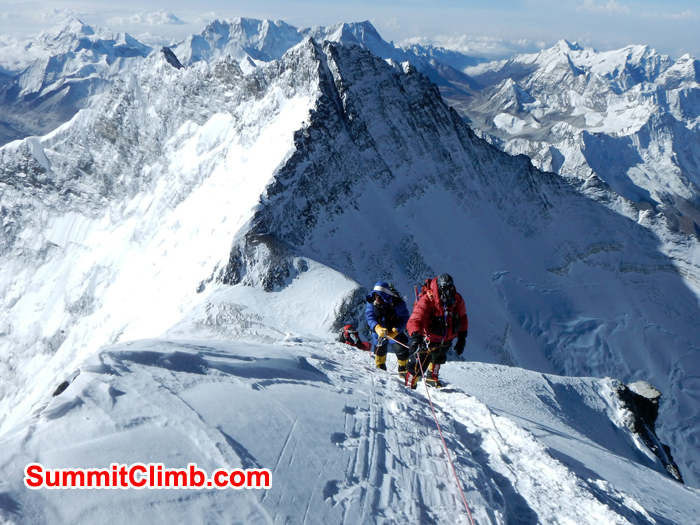 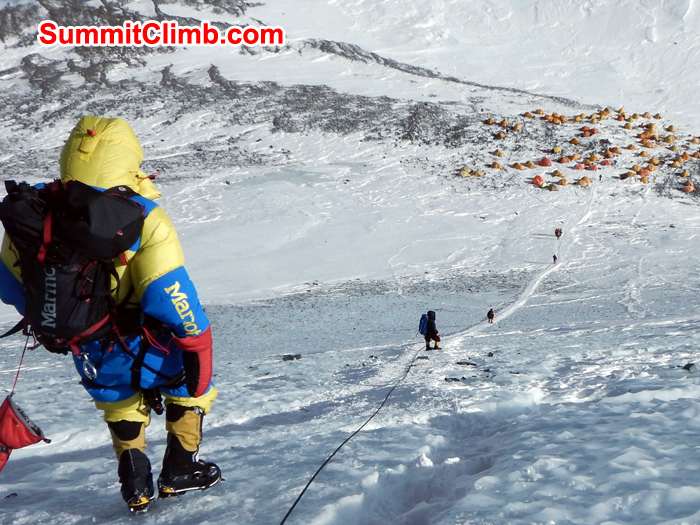 Fairman tried to take his own life three years ago. Today, Fairman wears a tattoo that expresses four figures: 22 for the number of veterans who commit suicide daily in America, 60-80 for the minutes that pass between each self-inflicted death, 8,000 for the annual tally of such tragedies, “and the minus-one is for me,” he said. "Summiting a mountain, there’s all these objective hazards that you have no control over, just like in dealing daily with mental health issues. You get to the summit, and what do you do? You go back down and start over again. It’s a daily struggle. That’s the analogy behind Summit for Soldiers. For me, it’s to show you can go and take on big challenges.”

Read the story about Fairman and the rest of the Summit for Soldiers American Legion team here.

Climbing Mount Everest is one of the hardest feats in the world — even for someone in tip-top physical shape. But a group of U.S. veterans who served in Afghanistan and Iraq, including one with a prosthetic leg, is working toward reaching the summit, 29,035 feet above sea level, to raise awareness of suicide rates among veteran and active-duty service members.

One of the most inspirational figures of the climb is retired Staff Sgt. Chad Jukes, who lost his right leg in Iraq in December 2006 when an improvised explosive device (IED) struck his vehicle. If successful, Jukes will be the first combat-wounded veteran to summit Everest.

If he is successful, retired staff sergeant Chad Jukes, who is climbing with a prosthetic leg, will be the first combat wounded veteran to summit Mount Everest.

After losing his leg, Jukes, an avid climber, didn't stopped climbing. He is making the trek up Everest with a prosthetic, which he said required extensive preparation. He was worried about how his body would handle sleeping at the high altitude and in the frigid conditions, but he is doing "fairly well" and is mostly sleeping through the night, he said.
The USX Veteran Everest Expedition's climb is being led by Lt. Harold Earls, a 23-year-old active-duty soldier assigned to the 3rd Infantry Division at Fort Stewart in Georgia. The team has reached the advanced base camp and plans to leave tonight for the first of four camps on mountain. 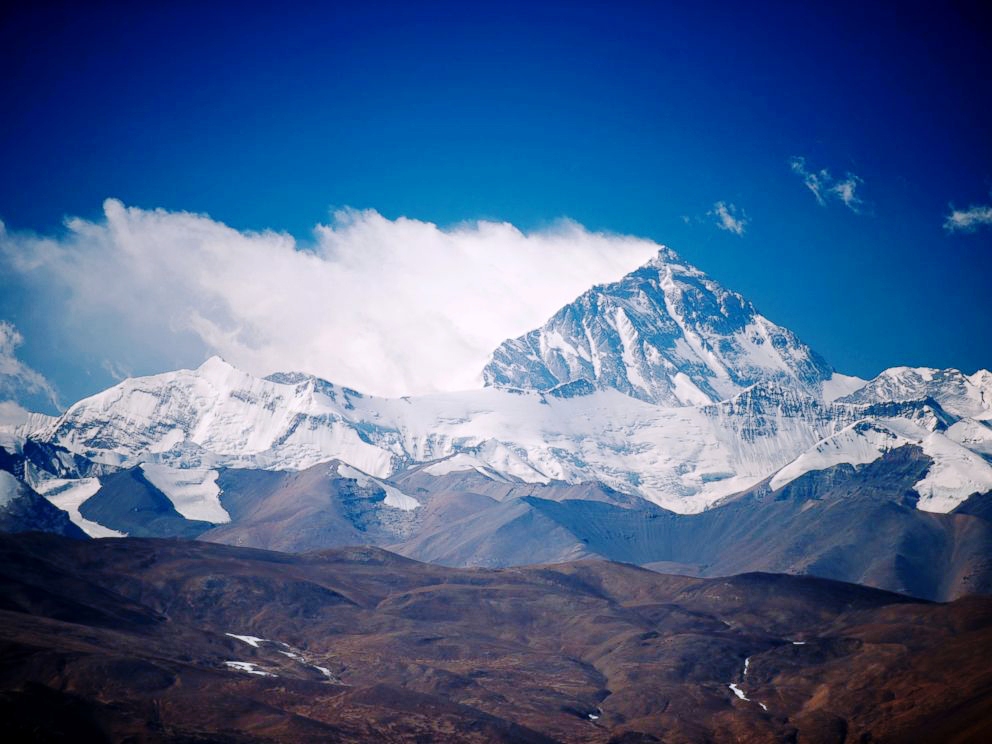 Mount Everest is pictured before the USX Veteran Everest Expedition is set to climb.

The weather there has taken a turn for the worse since the team arrived, with members saying the snowy conditions are "not good at all for climbing." But weather permitting, the team should be able to reach the summit by May 23.
Every day, more than 22 veterans and one active-duty service member commit suicide, the USX Veteran Everest Expedition said. The group hopes the difficult climb will draw attention to the epidemic of military suicides.

ABC News' Jon Williams contributed to this report. Back to top 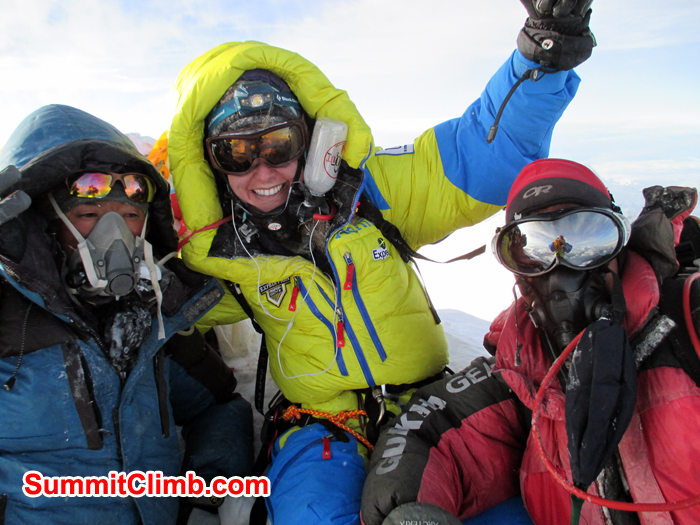 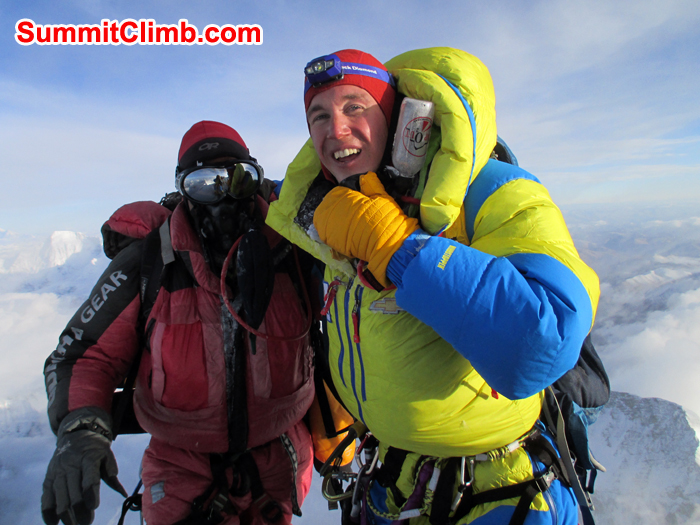 In August of last year, I made a trip to climb Mt. Rainier with K2 director Dave Ohlson, K2 producer Andy McDonough, and Team USX, a group of active duty and veteran soldiers, who were meeting and climbing with each other for the first time in preparation to climb Mt. Everest in spring 2016. On the way down, I fell and broke my leg and ankle. Thanks to some heroics from Dave, Andy, the rest of our team, and the Mt. Rainier Climbing Rangers, I made it off safely and have now recovered.

Despite the injury, we shot this 10-minute short documentary, which helped Team USX raise enough money to go to Mt. Everest this spring. Dave Ohlson accompanied them on the journey, and they successfully summited in May. Dave shot footage up on Mt. Everest and I am hopeful that we will be involved in putting it together.

The Everest climb received national media coverage as USX climber Chad Jukes attempted to be the first combat-wounded amputee to summit Mt. Everest. You can read more about the adventure here Back to top