Sean Foxcroft epitomized something beyond comparison in his life, work, and attitude towards the world. We would like to share our thoughts on recent events that have transpired. SummitClimb's thoughts and prayers go out to Mr. Foxcroft's family, friends and colleagues during these troubling times.

We have learned that Sean, our former leader-in-training from our Ama Dablam autumn 2007 expedition, has gone missing off of the east coast of South Africa. He was last seen being swept out to sea over 3 days ago after a heroic rescue effort to save several of the school children he was leading on a trekking expedition. All of the young members were saved and made it back to shore safely.

Sean, a 24 year old teacher from Manchester, England, was leading a group of 15 students between the ages of 16 and 18 on a four-week trip for the UK based company World Challenge Expeditions. The trip was winding down and preparing to return home when the incident took place.

He was supervising his young teammates playing a game of rugby on the beach at St. Lucia, north of Durban, on South Africa's east coast. A few of the teenagers went into the shallow surf to cool off after the game. Strong currents dragged them out of their depth very quickly and they began to struggle to return to safety.

Sean and another expedition leader immediately responded, diving in and helping the teenagers struggling in the open waters to safety as best they could. After assisting the team members, Sean was unable to fight the overwhelming currents and was carried out further to sea. He disappeared and his body has not been recovered.

The team was carrying satellite communications equipment and called for assistance using a distress beacon. South African authorities launched a major sea, air and land search involving a helicopter, boats and foot patrols along the beach where Sean disappeared. The search is still underway at this time. 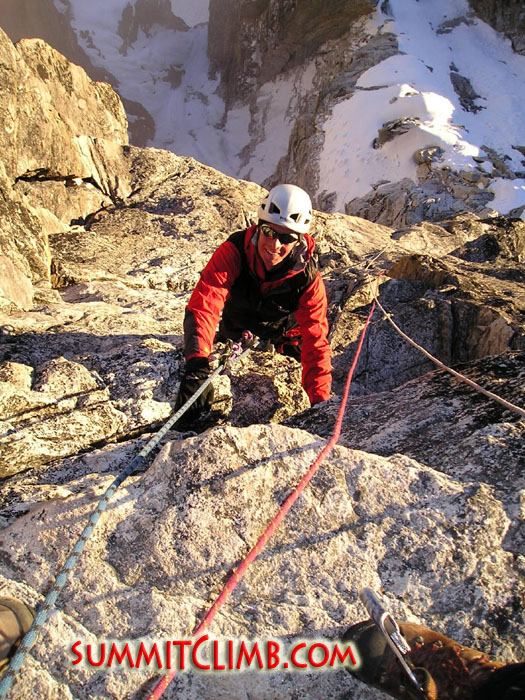 As a leader-in-training for SummitClimb, Sean was on his way to becoming an outstanding Himalayan expedition mountain leader. It was an honour to work with him in the autumn of 2007 on Ama Dablam, Asia's most famous rock, snow and ice peak. Beyond being a strong, sturdy climber, Sean possessed a natural ability to lead his fellow expedition members to their goals, as well as to the summit. He always had a nice word to offer in encouragement to those around him, liked relaxing, joking and talking with his teammates, but was very aware of his role as a leader, which he conducted as a professional. You would never have known Sean was only 24 from being around him. On expedition, age did not compare to his measure as a true and decent human being, striving to help others reach their potential.

It is very sad, but in some ways, it might not be surprising to us that Sean would risk his life to save the lives of his fellow teammates without hesitation. He was a strong and caring person who went to great lengths to help his team members with rare and honest disregard for his own comfort (photo right by Dan Mazur: Sean climbing the Yellow Tower, showing the team you do not need to pull on the ropes to get to the top, on Ama Dablam in October 2007).

We would hope the tragic loss of Sean will not be forgotten and might even serve to inspire each of us to do our best to be selfless and help others, no matter what. Please join us in honouring Sean's memory as that of a courageous, gentle and good human being. Our thoughts and prayers are with him, and we send our deepest condolences to his family, friends and colleagues.