Blog posts: Please click one of the links below to go directly to that blog post or just scroll down

Now that I am in Kathmandu for a few days with a Wifi internet connection before returning to Chupar, we wanted to give you an update on the Chupar Rebuilding Project.  Great progress has been made on building the new school, water system and latrine for the school as well as a house for Budu's parents.  A few technical challenges still have to be faced in the final month that we will be in Nepal.

Our team arrived in the village on February 18 after gathering food and some building supplies in Kathmandu.  Several days of earth moving and grading with a backhoe prepared the site for layout of the school on February 24.  On February 26, the first stone was laid.

By March 15, when Uttam and I returned to Kathmandu, the mud-stone masonry walls of the two school buildings with three rooms each had been completed up to the level of the top gabion band with all windows and door frames installed.  The turnout of villagers volunteering to build the school has been remarkable.  Men and women of all ages have come out to haul dirt and rock, mix mud, dress the stone, carry stones to the masons, and lay them into the walls.  Every day, from 25 to 70 people have shown up to work on the school while another 15 to 20 people have gathered stone from a source on a slope two miles away, busted it into manageable sizes with chisels and sledgehammers fabricated by village blacksmiths, and loaded it onto a 4-ton truck to take to the school site.  More than 50 truck loads of stone have been hauled to the site.

For years I've looked dimly on the roads being built into these beautiful Himalayan foothills as they have scarred the landscape, caused even more landslides, and are prone to washout during the monsoon season.  But, without the backhoe and truck from a local contractor, this project would have taken years, not months.  It is hard to imagine how long it would have taken for villagers to carry more than 200 tons of rock in baskets on their backs four miles round trip!  A few statistics on the school project through mid March:

--well over 200 tons of rock (about the weight of a Boeing 747!) have been carried, broken, transported, and hand-chiseled to dress them for laying in the walls
--12,000 man-hours of volunteer labor have been expended by villagers
--more than 1,200 lunch meals have been served to the workers by the project.

In addition to the school, a dedicated gravity flow water system is being built to bring clean water from a spring 150 ft above the school through 2,000 ft of buried pipeline down to a tap at the school, where school children can wash their hands and drink clean water.  A two-room composting latrine is being built next to the school for the students.  Gabion bands using polypropylene geogrid are being installed in all mud/stone masonry walls.  Also, a new house for Budu's parents has risen out of the ground just below our camp in the village.  The stone walls are complete with window and door frames installed and the framing for the roof is now underway.

Family from Village. Thad Stewart showing how to tie the geogrid together to form a gabion band.

Mingma Sherpa, the mason from the village of Patale, who has been a great help to our project Putali, Budu, and their goat. The I love Nepal guys.

A word on some of the challenges we've faced.  To say that finding building materials here is difficult, is an understatement.  Not only is there no Home Depot here, there are no lumber yards with pre-cut lumber!  The lumber yards have logs for cutting to desired dimensions with a band saw.  Most hardware stores have limited supplies of only specific items.  And finding one with actual aisles and shelves containing items is a real treasure.  We've spent days in Kathmandu looking for lumber, plumbing supplies, metal roofing, hardware, tools, etc.  Two or three trips to Home Depot in a day now seems like a piece of cake!  Despite these hurdles, the project has accomplished a tremendous amount due to your financial and moral support from afar, the incredibly hard work of the Chupar villagers, and persistence.  None of this would have been possible without all these ingredients.

Many methods of rebuilding have been proposed for post-earthquake Nepal-- earthbags, bamboo, wood frame, adobe, reinforced concrete, to name a few.  Many are innovative and most have their merits, but when you take a hard look at what is feasible, affordable, and culturally acceptable in these Himalayan foothills, the options narrow quickly.  Having spent a month in the village, we are more convinced than ever that the simple addition of gabion bands to traditional mud/stone masonry walls is the most appropriate, affordable, and earthquake resistant way to rebuild in these remote hill villages.  Stone masonry continues a tradition that has been around for centuries with just one simple addition.  So far, at least one other group--Nepal School Projects (www.nepalschoolprojects.ca), after visiting our project in Chupar, has decided to rebuild dozens of destroyed schools with gabion banding.  Just  today, I talked to a man working with The Bridge Fund who is assisting in rebuilding monasteries and schools in the Buddhist highlands of Nepal.  They are very interested in what we are doing in Chupar.  So, it seems that gabion banding in traditional stone walls will continue to catch on in the earthquake-affected region, where it is estimated that 770,000 houses and more than 5,000 schools were destroyed in the two big earthquakes last spring.  We are expecting an article on the Chupar school project in The Himalayan Times very soon, which will also help get the word out.

The roll of geogrid is a popular place to sit and have fun. The school and grounds from above on March 1

Every day in the local papers, there are articles about the Nepal Government doing little if anything to help those who lost their homes in the earthquakes.  In fact, they are now only talking about "transitional shelters", as they've been unsuccessful in getting permanent rebuilding started.  The second monsoon since the earthquakes is just a couple of months away.  Many people are rebuilding their own houses, forfeiting their chance of getting the promised $2,000 per household donated by the international community.  But few believe those funds will ever be distributed by the government in the near future, or at all.

Hopefully, when we leave Nepal, a new school will be standing in Chupar.  The next hurdle will be to get some quality teachers.  The district typically assigns teachers to these villages, but they are usually from other areas of the country, are not happy in a remote place a great distance from their home, and are not well qualified.  So, if you happen to know anyone with the desire and proper experience to teach in an elementary school in a remote village in Nepal, please let me know.

There are two other areas of assistance for the village that I want to mention.  The efficient and clean wood cook stoves purchased through the Himalayan Stove Project are on order and will be delivered most likely after we leave Nepal.  Your donations purchased 142 of these stoves at $150 apiece.  We are also looking into purchase of a rice threshing machine for the village.  Currently, villagers carry 30-kg bags of rice that they harvested a two and a half hour walk one-way down the valley for de-husking at a cost.  A local threshing machine would save much effort, time, and expense on their part.  The cost of such a machine is around $4K.  A system could be set up to charge a small fee for threshing with the proceeds going to maintain the machine and pay the operator.

give you a good sense of what your generosity is making possible.  Thank you again for your kind donations to help one village and for your trust in this project. 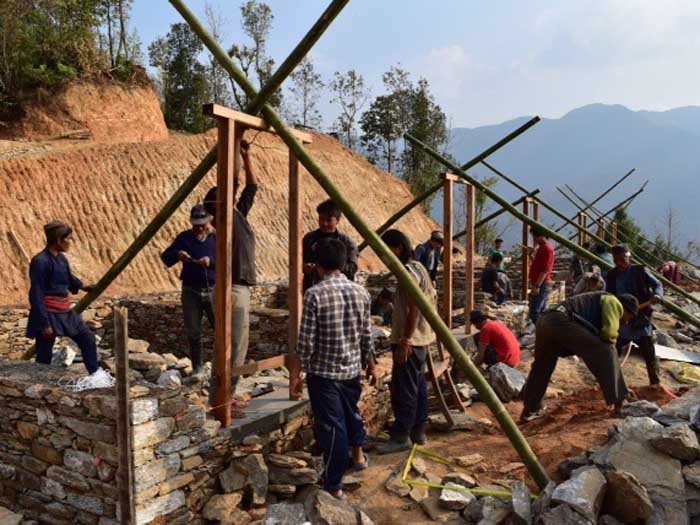 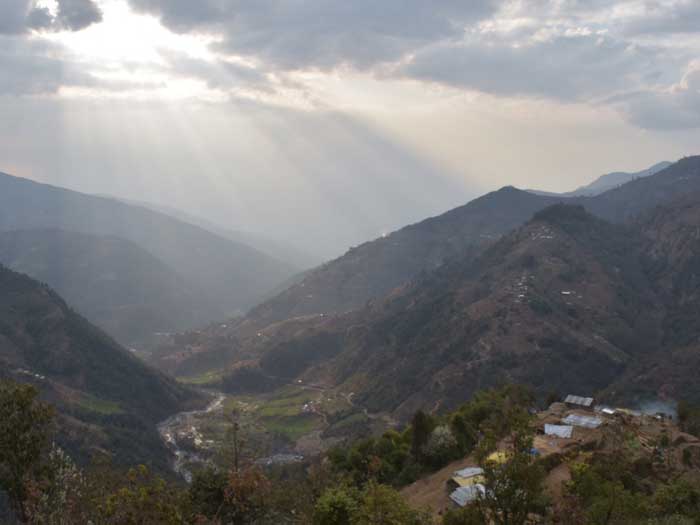 Next the walls go up to the gabion band under the window frames. Landscape of the village. Photo  John Vavruska 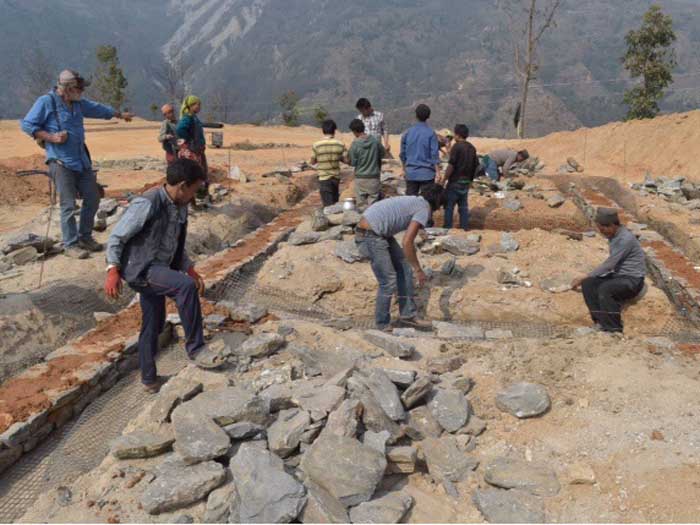 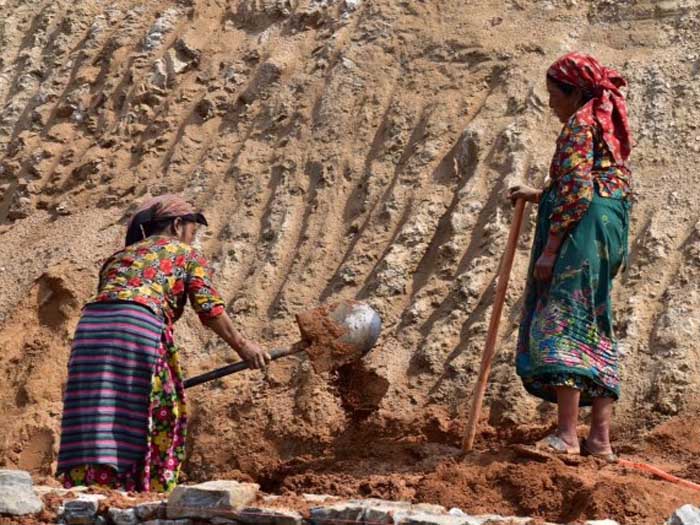 Next the walls go up to the gabion band under the window frames. Lady worker working for site. Photo John Vavruska 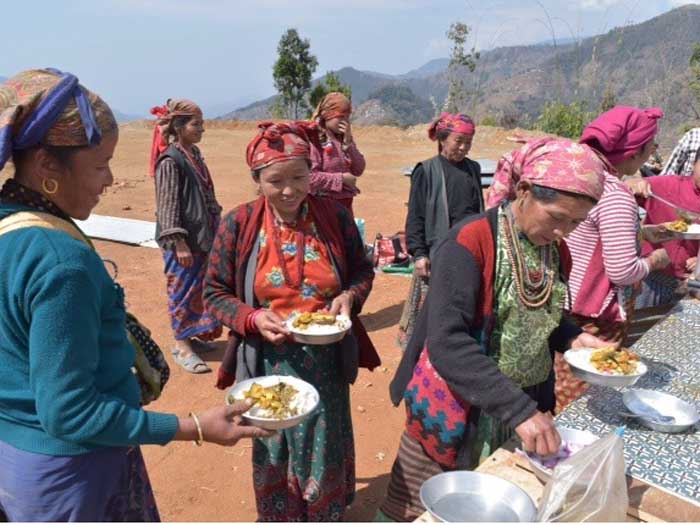 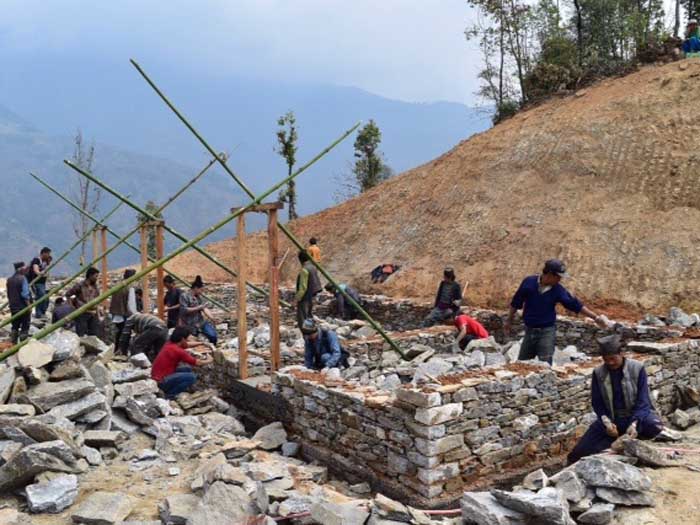 Break is over back to work! Next the walls go up to the gabion band under the window frames. Photo John Vavruska 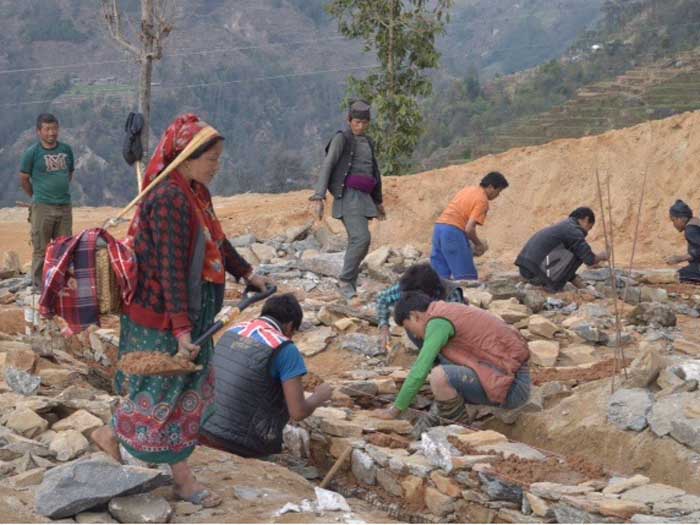 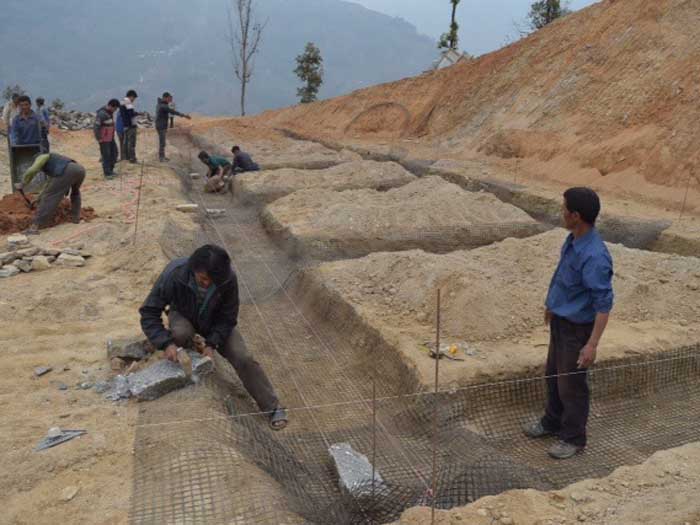 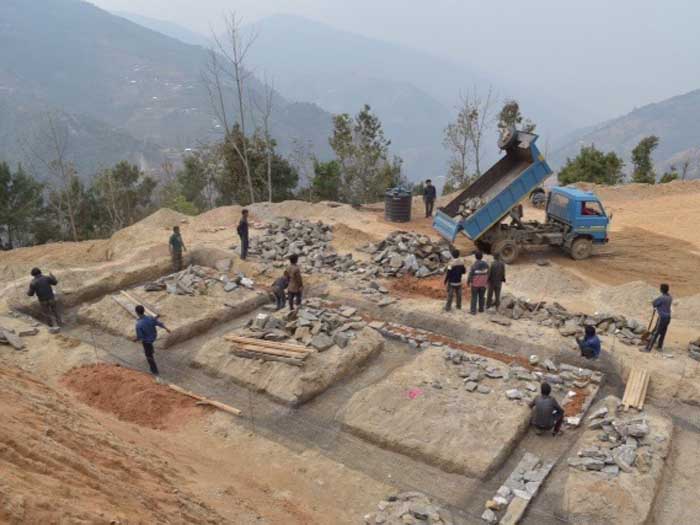 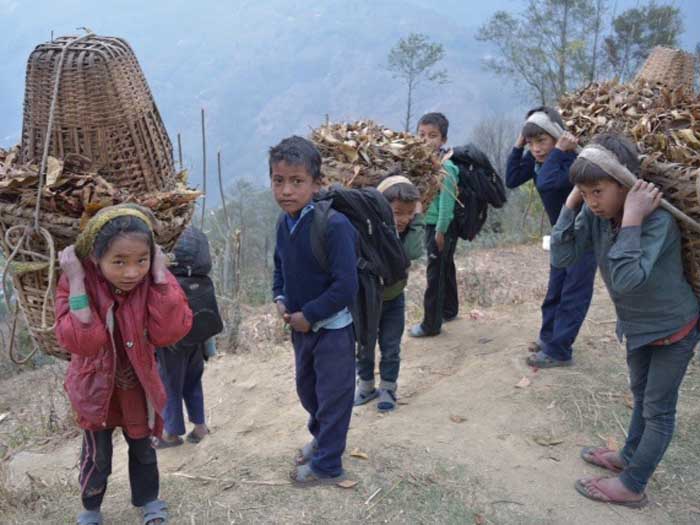 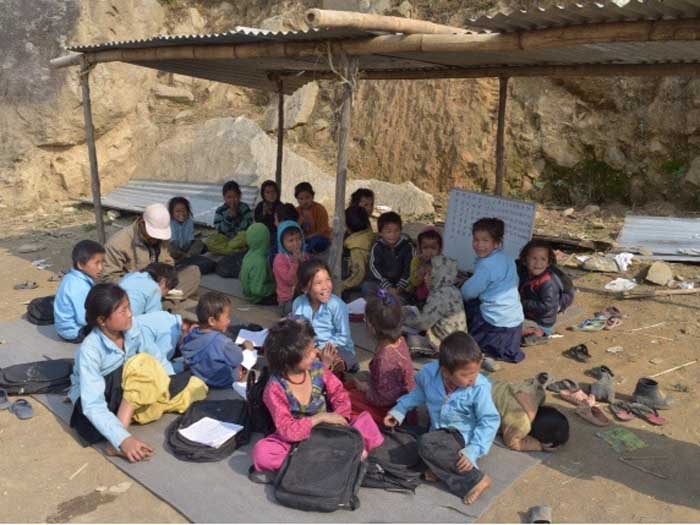 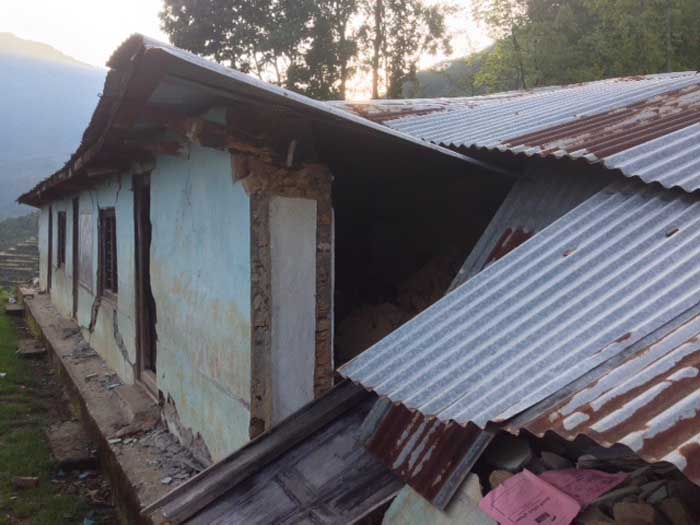 Temporary school for Chupar children. The earthquake happened about noon on a Saturday--the children were not in school. Photo John Vavruska. Back to top

Namaste! After a long journey to Nepal, several days of gathering hardware, supplies and food in Kathmandu, and a 6-hour jeep ride over rough mountain roads, we've settled into our Chupar "Base Camp".

Our Base Camp in Chupar, rivaling Everest Base Camp. Local people with kid. Budu in the camp kitchen

Budu and Indira at camp in Chupar. Unloading the truck on the first day in Chupar

We're just six days into our two month stay in the village, and great progress has already been made toward building the new school, latrines, and water system.  Logistics have been challenging but what the Nepali people are able to accomplish with limited resources never ceases to amaze me.

We have a great team here including those who came from the U.S., three enterprising Sherpas from the village of Patale who are here to learn about and help with the gabion banding technology, and the Chupar villagers themselves.

All purchased materials for the project have arrived in Chupar in a couple of loads in a 4-ton 4WD truck.    We've been fortunate to have use of a backhoe/front end loader to grade the school site and dig the footings for the school buildings.  Sources for excellent stone, sand, and gravel have been identified, and tomorrow, construction will begin.

Windows for the school. Excavation at the school site
Thad demonstrating his chain saw. Polypropylene geogrid for gabion bands

We will keep all of you kind people posted on progress toward our goal of helping this Himalayan village get back on its feet.

Warm regards from all of us here in Chupar.

Tamang funeral procession for 85-year old man who passed away in the night. Back to top