Mustagata: news of our expedition 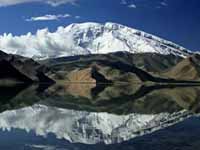 We are presently camped on a grassy field between Mustagata and Mt. Gonga along the banks of Karakul Lake. The views are fabulous. This is our acclimatization camp at 3650 meters. We have spent two nights here. It is essential to spend the time acclimatizing before heading up to our basecamp at the 4500-meter elevation. Today we will hike to basecamp, which is a 4-hour hike. All the members are in good health and itching to go (photo right by Brad jackson: Mustagata seen from acclimatization camp at 3600 metres/11,800 feet with Karakul Lake reflecting the mountain).

Yesterday most everyone hiked up the river valley between the two massifs – Mustagata and Gonga - amongst Kerghiz summer yurts. The Kerghiz have already set-up their summer camps where they heard their sheep and yaks on the high grasslands. Two of our members, Sandy and Hanne, were brave enough to take a dip in the frigid glacier waters that feed Karakul Lake.

Last week all our members trickled into Kashgar from around the world and through many ports. Most flew into Kashgar from Beijing, but others took the train along the ancient Silk Road; Yann came in over the Turugart pass from Kyrgyzstan; and four other members came over the Karakoram Highway from Pakistan. Amazingly, everyone arrived without delay, and only two lost luggage, which for flights that can have up to 5 connections, that’s not bad. We quickly located the lost luggage and got it to Kashgar before we departed for the mountains. 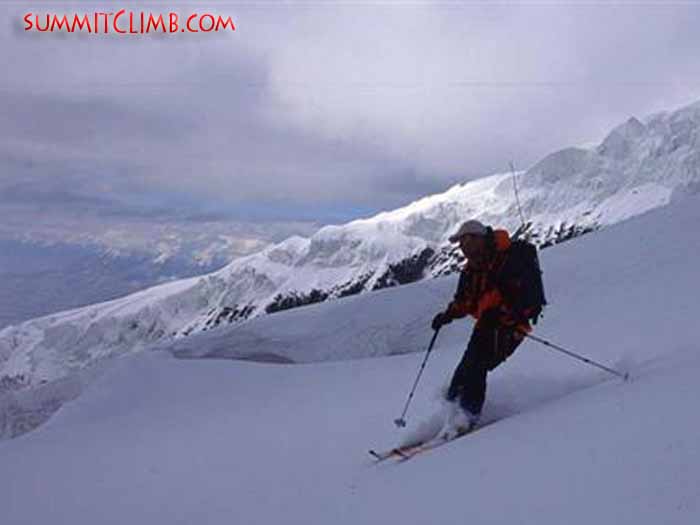 We have a diverse team with members from France, Belgium, Latvia, Denmark, New Zealand, Australia, China, USA, Switzerland, UK, Canada, and Tibet. It is always exciting to have such an affluent team with individuals from so many walks of life (photo right by Jon Otto: Urs skies down from the summit on our July climb).

Our days in Kashgar consisted of indulging in the local cuisine, which is wonderful - mouth-watering lamb shish kabob, savory Hami melons, fresh yogurt, and Uyghur style pull noodles. We explored Kashgar old town, the Id Kah Mosque in city central, visited the animal market where real bartering for sheep, horses, and camels is an animated affair, and meandered through the Sunday Bazaar.

There was also much purchasing of supplies and packing to do. We have to have all our mountain equipment shipped to Kashgar, for unlike Katmandu, Kashgar has no equipment for outdoor activities, especially climbing. We had boxes of gear to unpack, organize and re-pack – the normal pre-expedition organized chaos. Our staff worked hard in the oppressive Kashgar desert sun. Our staff, from Tibet, hate this heat. Two trucks of equipment were stacked high on the evening of July 2 and the entire team departed Kashgar on July 3rd. back to top

There is no lack of excitement on Mustagata this year between the ultra-warm weather and skirmishes amongst the Kerghiz. The Pamirs got little snow this year and the lack of melt-off is causing a shortage of water in the rivers for irrigation in parts of central Asia. What does this mean for the mountain… many crevasses. There are scores of open slots between camp 1 and camp 2. I have never seen conditions like this before and I have been on the mountain 7 times, the first tem in 1991.

The several days of ultra-warm weather we experienced this week made conditions just above camp 1 more dangerous than in previous years. The snow was very soft and the snow bridges weak. We put 360M of fixed line right out of camp 1 and will be looking to fix more line during the next few days. This is easily the most technically challenging part of the climb. We finally found a safe route around all the crevasses by end-running all of them except one. Since this crevasse is shallow we simply filled it in with snow, all the way up to its rim, to make a solid snow bridge about one meter wide across its flank.

Subashi at 3600 metres, which means pasture in the Tadzhik local dialect, is the starting point for our trek to basecamp (Photo: J. Otto). Camels carry all of our posessions to and from Subashi to basecamp (it takes 4 hours) and are strange and strong beasts (DL Mazur). Subashi camp, on the edge of the Karakoram Highway, with Mustagata in the background (Jon Otto).

It is common to hire the local herdsmen to help carry equipment from BC to C1 and they make a good amount of money for the work. The two ethnic herds people in the area are Tajik and Kerghiz. A couple days into the climb we hired the Tajik to carry loads (since they were hanging around our camp). Once all the negotiations were completed several Kerghiz showed up. There was this one boisterous Kerghiz teenager, who I quite like, that had his own sense of fairness. He insisted on the Kerghiz carrying half the loads. But we had already promised the Tajik and they headed up the hill towards C1. The Kerghiz chased them down, threatening a fight. No fists were flung but a long, strung out negotiation ensued. As always, a solution was reached.

The following day, the Kerghiz were at our camp in numbers. The few remaining loads we had ready were not enough to go around and a fight started as to whom would get the work. The solution reached - two people carrying one bag in rotation. back to top

Above the 6000M line, the snow quality improved greatly. That altitude is too high for any great melting to go on. On July 11 Lopsang and I went 2/3 the way to C3 and then descended to BC. The following evening the weather changed. We had been having such wonderfully sunny days since then, two wonderful, that it was about time for change. However, the change was fierce. Winds up to 100 mph (160 kph), we guess, ripped through C1. One tent almost went over the edge (a 500M drop) to the glacier below, and 3 tents were slightly damaged. Once the winds settled, the snow started. It snowed all day and the temperatures dropped as many members climbed from C1 to C2.

Bill, Kahshin, and Brett resting on a sunny day in Camp 2 at 6200 metres (Jon Otto). Dan skiing with the Kongur massif behind (Richard Bothwell). Ellen Miller roped to another team member at all times above camp 1 (DL Mazur). This photo was taken in the camp 3 vicinity around 6600 metres. Snowshoer heading out in the early morning, up to camp 3 at 6800 metres. You can see how easy the climb is by looking at the gentle slope angle in this photo (Jon Otto).

This morning it cleared. There are still some winds and it is noticeably colder, which is good, since this makes the mountain safer and the fresh snows have made the skiing bliss. Several members skied down from C2 today and said the conditions were heaven. So, it seems the storm may have been a blessing in disguise. I can’t wait to get up the hill again on my new Ethics. Most members are now in C1 or C2 doing their last acclimatization climb before the summit push. The climb is on schedule.

A fine farewell banquet in Kashgar wrapped-up our 3-week climb on Mustagata. Sichuan cuisine and a plethora of free flowing Xinjiang beer and other much sought after spirits were the call of the night. The following morning those flying back to Beijing stumbled into their airport shuttle barely in time. A perfect end to a fine expedition. back to top

This year many summited and those that did not obtained a personal height record by breaking the 7000-meter (23,000 foot) mark. The weather gave us a scare during the last week of the climb as three separate groups were in different stages of making their push towards the summit. We had groups in all three camps on the evening of July 18. That evening after sunset the clouds quickly set-in and it snowed throughout the night. The following morning the conditions were slightly better and the group at camp 3 decided to go for it. However, their attempt was quickly stalled by whiteout conditions and they were forced to turn back to the sanctuary of tents at camp 3.

This day the camp 1 group moved up to camp 2, while all those at camp 2 stayed hunkered down in their MSR and Ozark tents. The weather prohibited summating or even moving up to camp 3. Lower on the mountain it was reasonably better conditions but as is the norm in the mountains became exponentially worse the higher one went. It was obvious that the weather would decide the destiny of these climbers. Normally, bad weather cycles around Mustagata last 1-3 days. I had received a general weather report for the area but decided it was not that accurate, since it was predicting clear skis, but was still snowing on Mustagata.

It was also apparent that we may quickly experience a bottle neck at the high camp as those already their would not wish to come down until the weather broke and they had their go for the summit, and those in the lower camps would wish to move up to the high camp in anticipation of good weather. Thus transpired the events of the next 3 days. back to top

*July 19* we had 15 people at camp 2 and 5 at camp 3. Everyone was waiting for weather. Everyone's summit destiny depended on Mustagata's disposition.

*July 20* morning the weather broke as a northern zephyr wafted over Mustagata's slopes. Not a single cloud could be seen. It was a climber's dream come true - it was ideal summit conditions. Four members at camp 3 (Nigel, Ben, Yann, & Phil) departed for the summit in the early morning. Santiz had a second restless night at camp 3 and decided that snowboard, gravity, and thick fresh powder was more appealing than the summit. He curved turns for over 1500 vertical meters down virgin white bliss to arrive safely back at BC in time for dinner. Meanwhile the summit team made good time to the top and was also safely back in BC the same day.

Meanwhile, most of camp 2 moved up to camp 3. Unfortunately, altitude induced symptoms of sorts overtook a couple members and they decided to descend. This is common at these altitudes and one rarely feels 100%. However, it is also common that the desire to reach the summit on such a magnificent day gives others that extra boost of energy and they make very good time to the top and back.

After 36 hours of snowing the conditions were bliss. I summated at 6PM. After reaching the top I ripped of my climbing skins, tightened down the buckles on my AT boots, cliped myself into my BD Ethics, and floated down 1400 vertical meters of untouched powder. The following day I glided down another 1200 vertical meters to the snowline. That's Mustagata - the longest, most doable, high altitude ski run in the world. back to top