I am sitting now in Kathmandu, awaiting my flight back to Germany for tomorrow. So it is time to close this newsletter for our SummitClimb Cholatse Expedition 2009. We could call it a success with the:

We did not manage to climb the technical demanding route planed up the North face of Cholatse though, but considering the bad conditions through all the snow and wind of this season, at least we came down safe again. That should be the main goal anyway.

With that I wish all our readers all the best, thank everyone for their interest and support!

Good bye until hopefully again soon. - Felix back to top 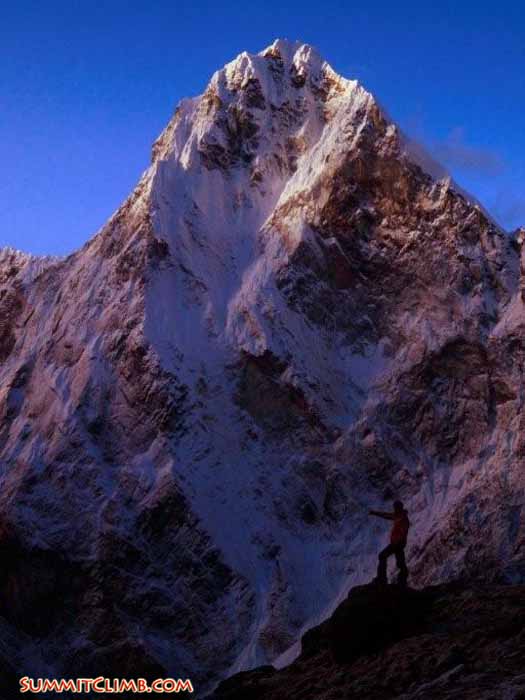 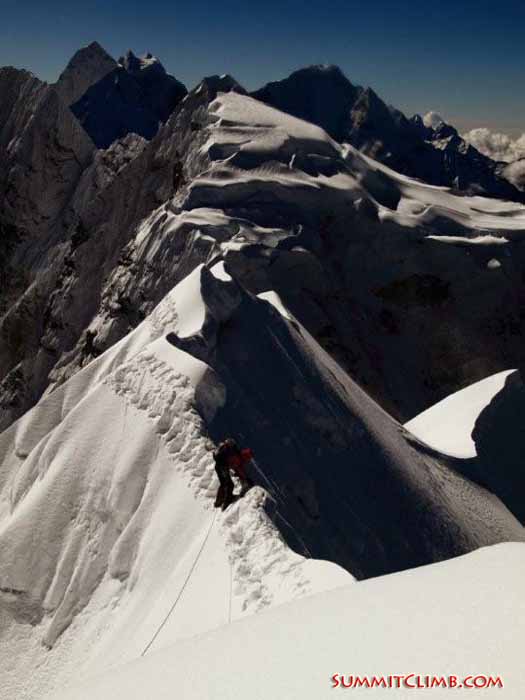 Robert in front of Cholatse North Face. Robert on the way down traversing the exposed summit ridge on the southern side (Felix Berg).

To summarize briefly, on the 21st I joined an American team on Island Peak. We made it to the summit very quickly from basecamp and back down.

After that we had a day of rest and went down again.

On the 24th I joined with an Austrian climber to try again for the North Face of Cholatse. We had to turn around at 5500 metres, as the conditions were quite bad. Now we’re on our way back down to Namche. I hope all is going well with the Baruntse expedition. Bye. back to top 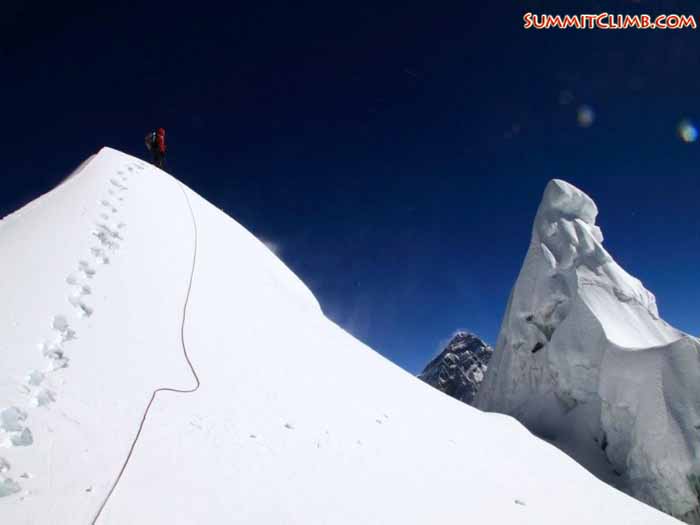 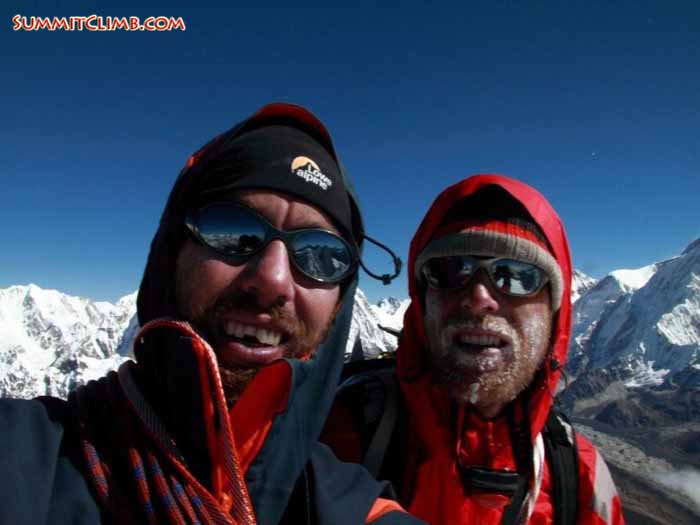 Yesterday we broke down Cholatse basecamp. Robert Steiner has gone down now and is probably in Gorak Shep at the moment. I’m going to do some more climbing, possibly Island Peak before heading over to meet the SummitClimb team at Baruntse. Cheers! back to top 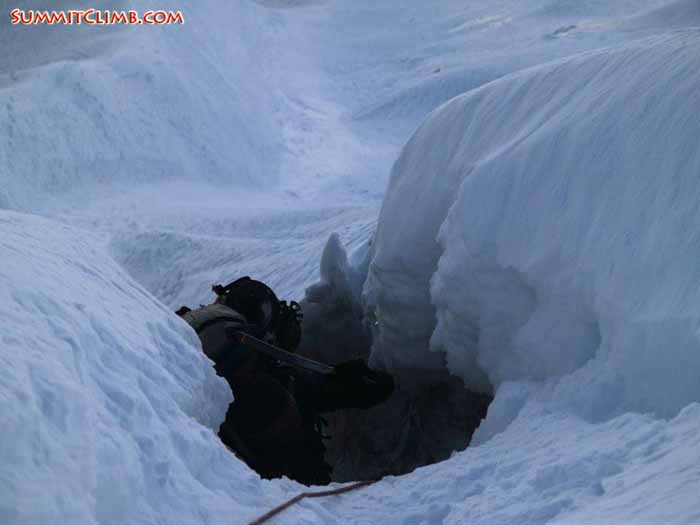 Robert in the tunnel on the last pitch to high camp of Cholatse at 5700m (Felix Berg).

Unfortunately, Robert hurt his knee a few days ago twisting it on rocks that moved underneath him, so he can’t climb for the rest of the expedition. Yesterday I climbed up the north face of Cholatse on my own, but it was too dangerous, so I turned around at about 5400 metres/17,700 feet. It seems there is too much snow up high and that the north face of the mountain is not safe.

The plan is to now go over to Baruntse and catch up with the SummitClimb team there. Thanks and goodbye. back to top

13 October, 2009
Here is a brief description of our Cholatse team's movements the past week from Felix Berg.
The plan is to head up again for some more climbing as soon the snow settles.... back to top

Hello SummitClimb news, this is Felix Berg, the leader of the SummitClimb Cholatse expedition.

Yesterday on October 11th we (Felix Berg and Robert Steiner, both from Germany) summited Cholatse on the normal route around 9:20 a.m. local time. Our satellite telephone fell down 700 metres, but we found it and it is still working. Now we are on our way back down into the valley. Thanks for following along our expedition. Bye. back to top

Yesterday we crossed the Cho La pass and camped at the base of the normal route. We had a clear night and our first sunny day in quite a while. We are thinking of doing the normal route, as it should have less avalanche danger than the north face. At the moment we are at 5150 metres/16,900 feet on the moraine ridge overlooking the normal route. Wish us luck. We’ll call in again soon. back to top

We’re back in basecamp and it has been raining heavily the last few days. So we haven’t done much progress on the mountain and have been mainly hanging around camp and doing some fun hikes in the surrounding area. Yesterday we reached 5800 metres and had had a chance to look around and see stunning views, despite the rain.

We have yet to get up high on the mountain. Besides that, the weather continues to look bad, raining continuously. There is not much to do but wait in basecamp and hope the weather improves. I will call in again when the weather looks better and we are moving up the mountain. Bye for now. back to top

30 September, 2009
We have spent the last few days acclimating and hiked up to the Cho La Col during two days of bad weather and camped there at 5500 metres/18,100 feet on the glacier. The next day we snow and ice climbed up on the ridge to about 6100 metres/20,000 feet. The view was amazing and we luckily picked the only good weather day, allowing us views of Cho Oyu, Tibet, Pumori, Everest, Nuptse and Ama Dablam. We descended to 5500 metres to get afternoon snowfall, followed by another day back to basecamp in mixed weather. Unfortunately, Robert has a small flu, so he is resting in BC while I hiked to Kala Patar with beautiful views of Nuptse, Everest and Pumori. Thanks for following our expedition. - Felix Berg back to top
24 September, 2009

We arrived at Cholatse basecamp 2 days ago on the 22nd. There was mixed weather, so yesterday we spent all day walking around and acclimating up to 5100 metres/16,700 feet. Today the weather is good again and we’re going to hike up to Chola Col, which is at about 5600 metres/18,400 feet to get acclimated and spend a few nights up there.

Thanks for following along our expedition. All the best. Bye. back to top

We reached Pheriche (4300 metres/14,100 feet) today, where we will spend the last tea-house night before reaching basecamp tomorrow. Acclimatization is going well, and we're feeling healthy too. Today in the morning we sorted all our necessary equipment and picked up some basecamp gear from our SummitClimb store in Pangboche. Very convenient to have it there. We're getting excited to reach the mountain soon. Thanks for following along our expedition. back to top

We trekked up to Namche Bazaar (3300m) today. It rained heavy through the night, but kept dry during the morning, in which we hiked up. Now we are wandering around Namche, ckecking the shops for last-minute shopping. We're getting excited to reach Cholatse and are surrounded by stunning views of neighbouring peaks. Thanks for following our expedition. We'll report in again soon. back to top 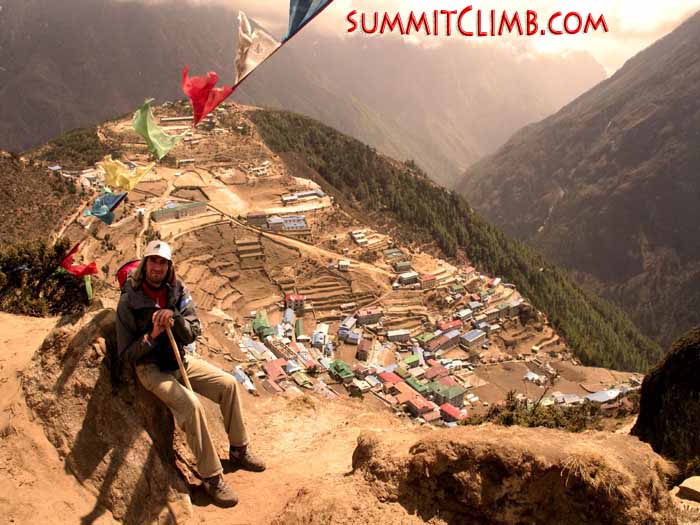 Namche Bazaar, the capital of the Sherpa people. See this unique village on our trek to and from basecamp (Tunc Findik).

Our 3rd post-monsoon expedition is on the way. We look forward to exploring a new mountain, possibly a new route in the Khumbu valley with the peak of Cholatse (6400 metres/21,000 feet).

Our team consists of Felix Berg and Robert Steiner, both from Gremany. We plan to climb in alpine style, keeping our approach light, flexible and inexpensive.

Our flight from Frankfurt to Dehli with Air India was the first interesting experience. No problem with the check-in, old-fashion living room design and movies, but quite good food, our landing went quite rough and ended with a full-break and squeaky landing. Waiting at the Delhi airport over night we got very excited to reach Kathmandu, now finally we are here.

We met our local agency for SummitClimb in Kathmandu and started with the preparation work. With 45 days planned in Nepal we have a lot of time to get acclimated, explore the Khumbu valley and possibly get more than just one climb done. From now on we will be calling in some dispatches from our satellite phone, so stay tuned. Thanks for following along our expedition! - Felix Berg back to top