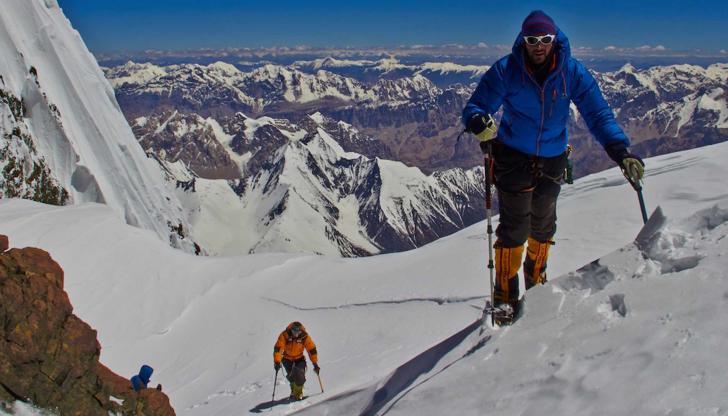 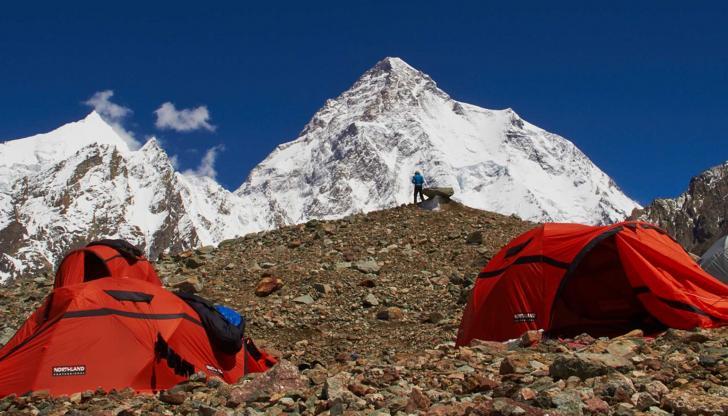 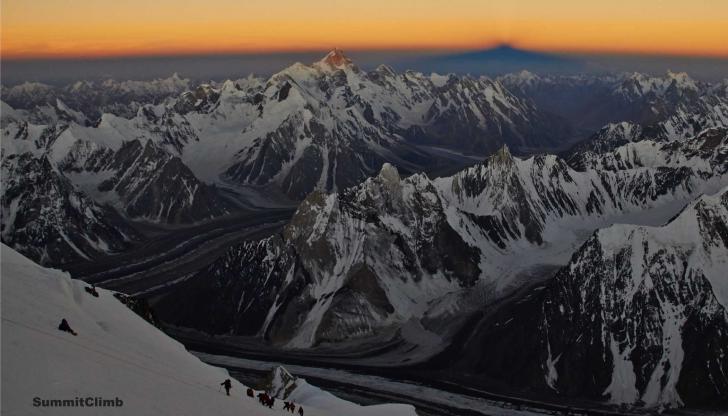 Climbers hiking up for next camp. 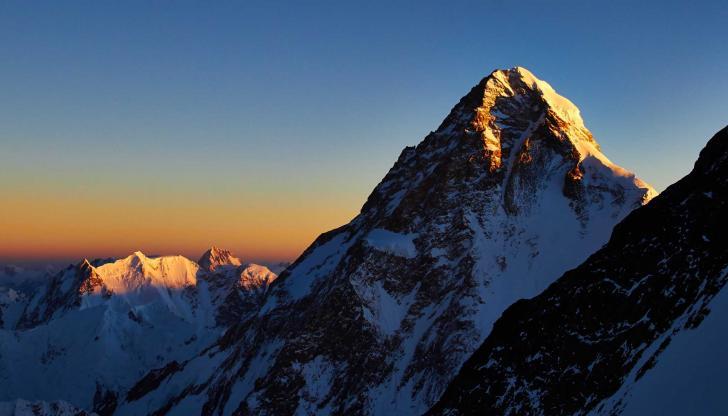 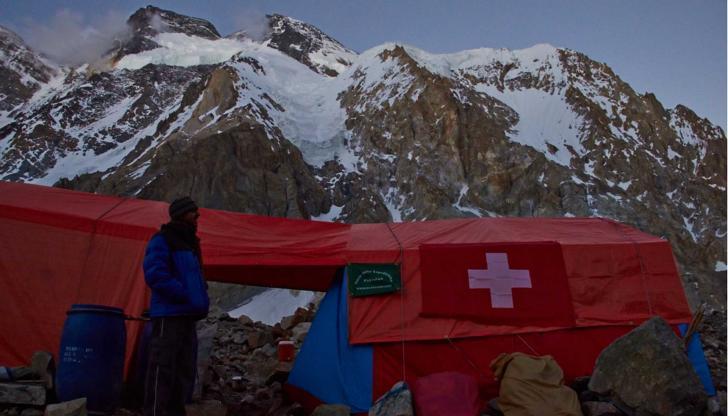 Previous Next
Blog posts: Please click one of the links below to go directly to that blog post or just scroll down.

On 25 July some participants were still keen to try for a summit attempt, but then reversed. Expedition Leader Julian Beermann sent this message via satellite phone: "All reversed due to snow conditions / avalanche danger. Today we start trekking back. All participants ok and healthy "- certainly the wise decision. After 3-4 days trekking we expect the participants to be back to civilization.

On July 20, at about 9:45 an avalanche occurred on Broad Peak .The expedition leader Julian and almost all participants of the Summit Climb expedition stayed put on July 20 due to the danger of avalanches in the base camp.

Update from Expedition Leader: Back in BC. Acclimatization completed. Now waiting for good weather for summit push..

Update from Expedition Leader: Successful push to C3 at 7100m today. Fixed lines and tents. After one night here tomorrow back down to BC 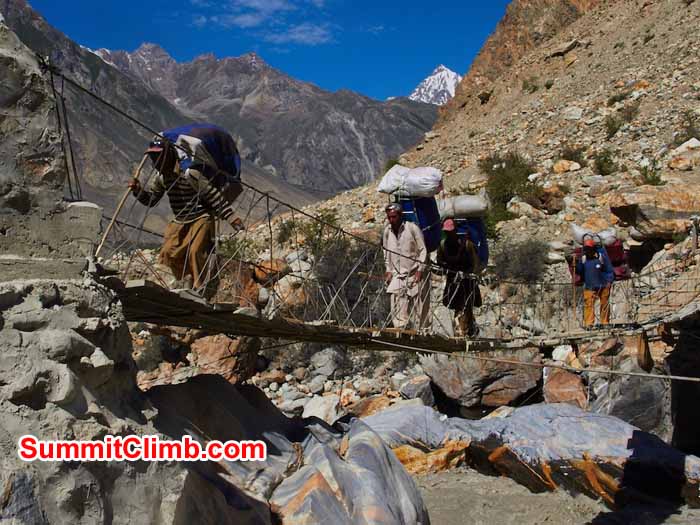 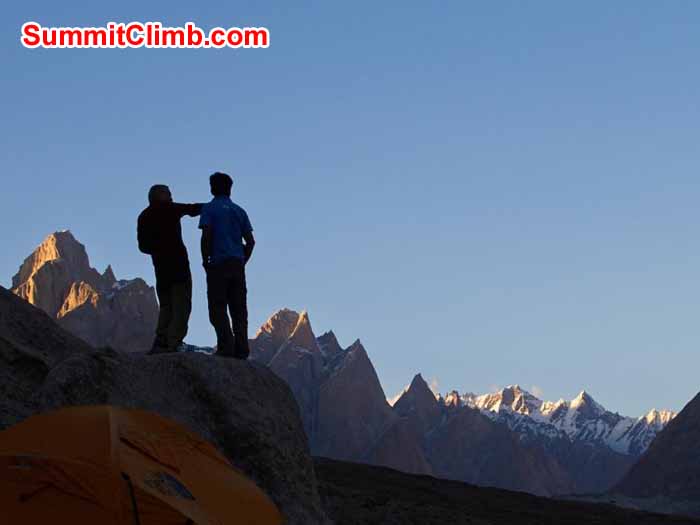 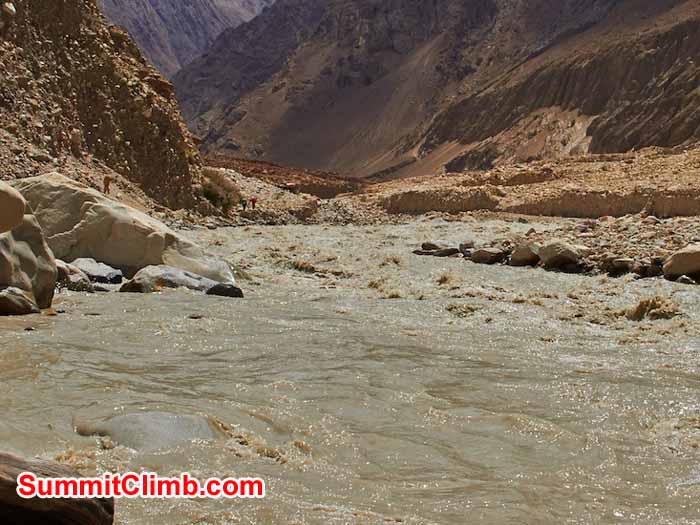 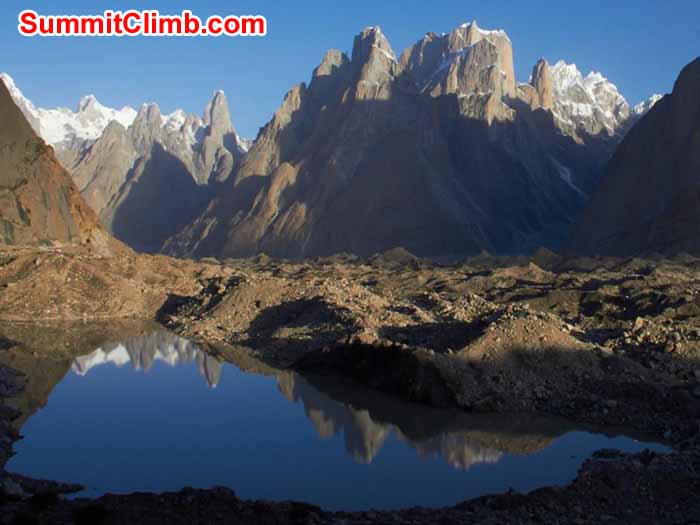 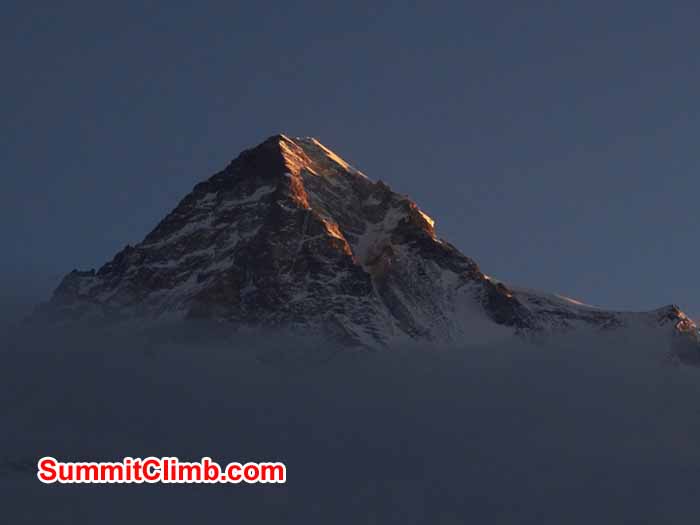 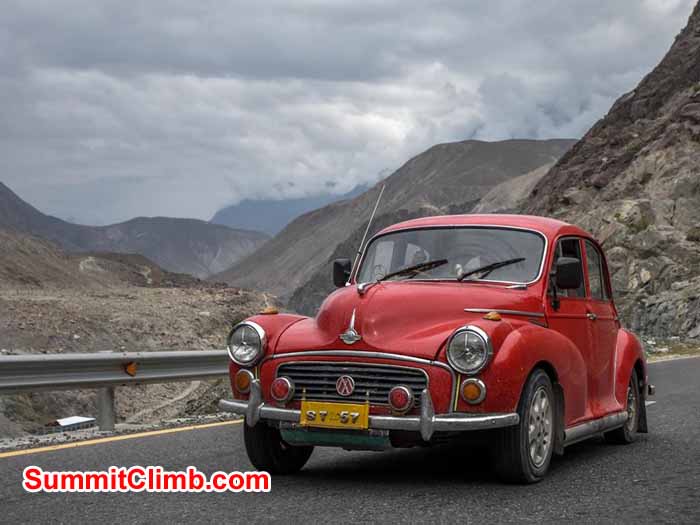 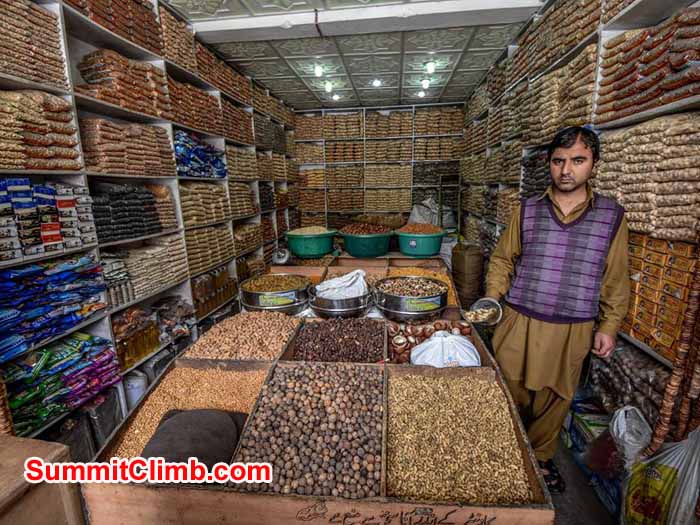 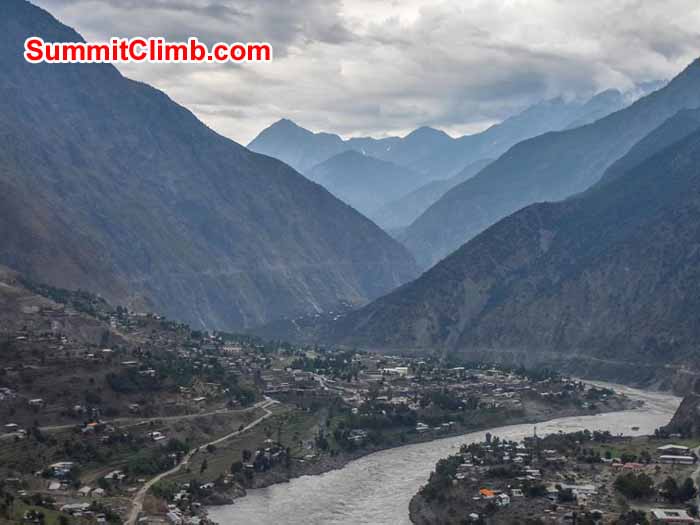 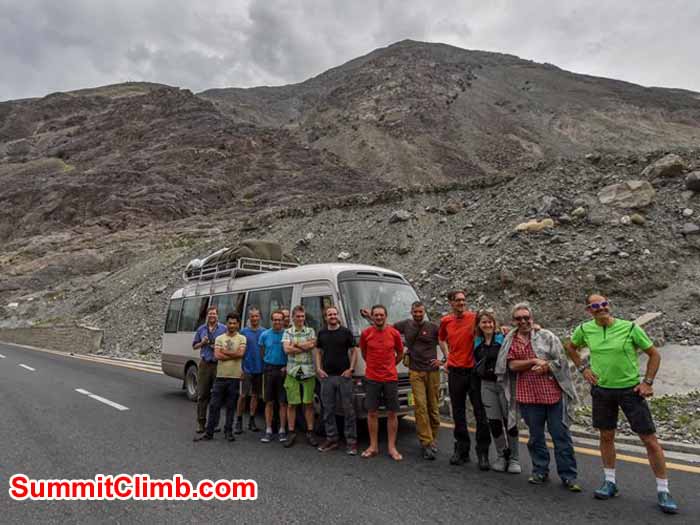 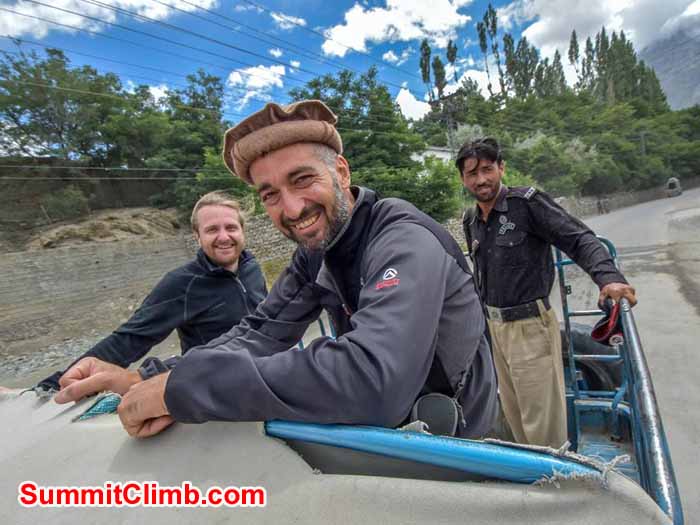 12 July -
Dear folks back home,
Now our first detailed report. Because of transmission issues unfortunately it’s a little late.
5 July -
The first team rose at 5 clock. The 5-member team led by Oscar, who is on his 14th 8000 - the other 13 he has already climbed - started to put fixed ropes in the Buhl route (first ascent). At the same time start Julian, Frank, Uwe K., and Tunc, who is on his 11th 8000er began with the Broad Peak normal route towards Camp 1 to about 5750m. Again, they fixed ropes. The team led by Julian reached Camp 1, provided tents and spent the night right there. The team led by Oscar along the Buhl route did fine but at the last 50 meters they ran out of rope. Both routes take about 250 Hm below Camp 1 together. Oscars team returned midday back into BC.
Julian, Tunc, Frank and Uwe K. rose on Monday 6th July and continued on to Camp 2 at approximately 6250m and laid their fixed ropes. Simultaneously launched Oscars Team with Jens, Uwe H., Sepp, Philipp and Florian to insure in the Buhl route the final stretch and reach Camp 1. Tsumiyo and Steve started simultaneously in BC via the normal route to Camp 1. Until today, Friday, 10th July, almost all members have spent several nights in Camp 1 and 2 and also survived intact. Today we are all together except Philip, who needs to catch up a little acclimatization, back in BC. Until yesterday we had great weather. From today until Sunday, according to weather forecast we are expecting bad weather. We will now relax 2 days in BC .We hope to start again on Sunday for further acclimatization if we can.
PS: With animals we seem to have no luck. We did have another yak on the expedition but unfortunately, we learned that it had plunged himself down a slope! And another goat fled.
4 July -
The live tracking on Summit Climb Map Blog now works correctly. The news of our expeditions are connected directly
Our currently running expeditions can be followed live via text messages and GPS tracking (if turned on):
https://share.delorme.com/JulianBeermannSummitClimb
The pages are provided by Delorme InReach (Safari as your browser may cause problems)

Baltoro Trekking - the way to Broad Peak
3 July -
We arrived for our 5-day trek on Friday, 3rd July in wonderful weather, which we had since the beginning of the trek, at our Base Camp on the Godwin-Austin Glacier below Broad Peak and K2. Previously we had bad weather with a lot of snow, which was staying for a few days and we launched the Expedition 2 days in Urdukas Camp.

But what is undeniable is that without the help of the carrier such an expedition is not possible. For our trek in the camp Goro II all carriers solemnly accepteda tip on the last morning. That was more than deserved, as we all had contact with them. They are so friendly, helpful and gracious and distance themselves clearly from extremist groups. This also applies to all Pakistanis, we could meet outside the expedition members, many residents on the streets in Skardu as examples
The Friday and Saturday were then used to set up the base camp.
Except for a few slight, "normal" diarrhoeaissues all the team members are well. Arriving at the mountain and somewhat acclimatised to the BC-altitude we now head on to the mountain.
28 June -
After the first night in a tent in Askole we all started our trek on Saturday, 28th June. We headed for the tent camps Jola, Paju (2 nights, the rest day Porter), Urdukas and Goro II to the base camp at 4800 m.
The trekking was in itself breath-taking and remains indescribable. On the first night unfortunately a donkey passed away and a goat escaped. However, we still had enough goats. Between Paju and Urdukas we entered the Baltoro Glacier, the largest glacier outside Antarctica, we no longer were in the Concordia Square. Goro II, the last camp before our BC was already directly on the glacier, so already here we were on Holiday on Ice!The trek itself offered us glimpses that every mountain enthusiasts love and provided probably the greatest feeling. Here are just a few excerpts: The Trango Towers, Namless Tower, Cathedrale, Musherbrum, PajuPeal¡k, Gasherbrum 4, Gasherbrum 2, of course, our goal Broad Peak and the famous Concordia Square, where we on the Baltoro Glacier the Godwin Austin Glacier changed, the fabulous view of the K2. Wow!
27 June -
Started with birthday celebrations and a birthday cake forJulians’ 30th. Then we took some jeeps back to the "road" to Askole. The travel time for the 140 km trip was approximately 8 hours. Not included was the transfer and transfer into other jeeps while driving, because a bridge was down. So finally began the adventure. In the late afternoon we reached the second jeeps Askole, our first tented camp on 3000 m. In the small town Askole we met for the first time at the same time all together, so all team members were together (Abid Ali, Yugoot Shah, Jamshed, Abass, Sakhawat), the two high-Porter (Ali Durani and Fazal Ali) and all Porters.
Ljaz, our liaison officer from Nazir Sabir Expeditions, the local agency also accompanied us from Islamabad to the base camp. He introduced himself to us all and thanked us for being here and giving work for the Porters etc. You can tell that due to recent local problems, as always, the ordinary people suffer the most!
27th June 2015
Expedition Leader Julian Beermann celebrates birthday in Askole: Happy Birthday !!27th June, the whole team arrived safely in Askole. A starry night in Askole was a nice birthday present. Tomorrow begins the first day of six days trekking to the base camp - to the forthcoming Baltoro Trek here are some pictures:
http://blog.summitclimb.de/
24 June -
On Wednesday night 24th June we arrived finally Skardu.  We were happy to arrive as we checked into our hotel.
We planned to spend one day and two nights here while we check theteam’s equipment, material and supplies and complete and continue doing bureaucratic necessities in different offices. However, the bureaucracy was not going smoothly in Pakistan, so we stayed an extra day in Skardu. We were able to complete the purchases and the packing of 192 Loads 25 kg for the carrier alone. On the last evening, Friday 26th June, we were invited to the Concordia Hotel for a barbecue, of course, without beer. On this day all bureaucratic activities were successfully completed and we were ready to continue with our expedition.

24th June 2015
Yesterday we drove over to BeshamChilaz overnight. The road conditions were great and because of Ramadan there was little traffic. Today the group has arrived in Skardu. Material is directed and bureaucracy was arranged this morning. For the participants this was a pleasant break after 2 days "on the road" when we arrived in Pakistan.
23 June -
Between Friday, 19th June and Tuesday morning, 23rd June all team members reached Islamabad. The recent arrivals were our Austrian and German members.
Our international team (Switzerland, Spain, Turkey, USA, UK, Japan, Germany, Austria) was complete on Tuesday morning and we set off at 6am which was a little tiring especially for the latest arrivals. The flight from Islamabad to Skardu was cancelled almost every day. So we took two buses on the adventurous 2-day trip on the legendary Karakorum "Highway" to Skardu.  Tuesday and Wednesday, we went along the Indus and impressive landscape on a road that would probably be partially known in the West.  This takes you right past the Nanga Parbat, but we could not see due to the weather. Also you pass the place where the probably most wanted man was caught. We saw the very impressive elaborately decorated trucks that commute on the KKH between China and Pakistan. Determined, very strenuous and dangerous work for the drivers. We are joined by Usama, our genuinely nice, helpful, open, young Liaison officer who will accompany us on the whole expedition. We should also mention the countless stationary checks by police and military in the street and we were escorted to most parts of the road, each one armed police or soldiers on the bus.
On Friday, 19th June, our expedition leader Julian Beermann landed as a vanguard in Islamabad to tackle various bureaucratic activities. This caused him, as he assured us, in 40 degrees heat an incredible amount of joy ;-)
x +
x +
]