News of our recent expedition: Aconcagua 2013

Blog posts: Please click one of the links below to go directly to that blog post or just scroll down.

Hi, here is the dispatch for the February SummitClimb Aconcagua expedition 2013. Today is Feb 09th and we´re back to BC.

We just summited Mt.Bonete at 5050m high. The acclimatization plan is finished and we´ll head to high camps starting tomorrow. Seems that the 14th might be a good day with low winds and low precipitation. So our plan is to sleep at Plaza Canada 4950m tomorrow, then 2 nights at Nido de Condores 5600m and finally reach camp 3 at 6000m on the afternoon of the 13th.

Everyone is adapting extremely well and I have to say we have a very strong team. So far no one had headache or any altitude related problem. We´re having a lot of fun!

Max Back to top 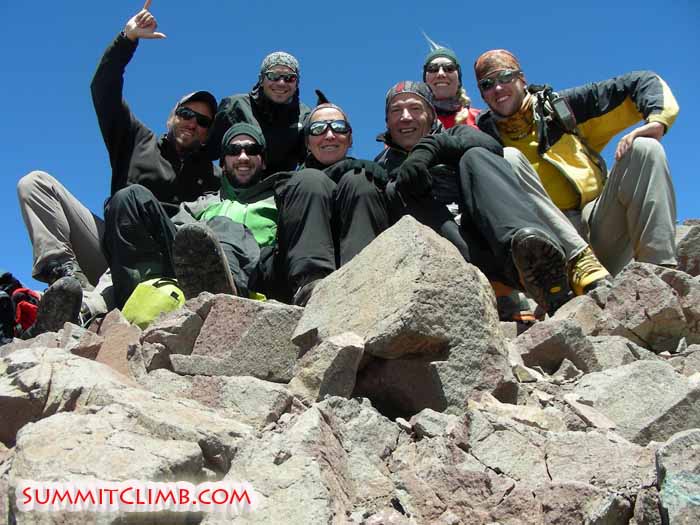 Team on the summit of Mt Bonete (Max Kausch).

Hi, this the dispatch for the Aconcagua February expedition 2013. Today is Thursday 7th of February and we are at Plaza de Mulas, 4400m.

The team is adapting very well. Yesterday we did a 20km trek from Confluencia which was our intermediate camp. We also had a very nice trek to the south face of Aconcagua 2 days ago. The weather was kind of ok until yesterday. On the way here we saw some lenticular clouds and they brought bad weather. This morning Aconcagua is clearing slowly and we can see the whole west face from here.

Rene and Jaqueline went trekking nearby and enjoying the warm weather. Alessa is sunbathing and reading a book as today is our rest day. Tato and Patrick are having a nap and might go trekking later. Everyone is having a great time!

We’ll go for our first carry to camp 1 tomorrow then move to camp 1 on the 9th.

Thanks for following the news at SummiCtlimb.com
Back to top 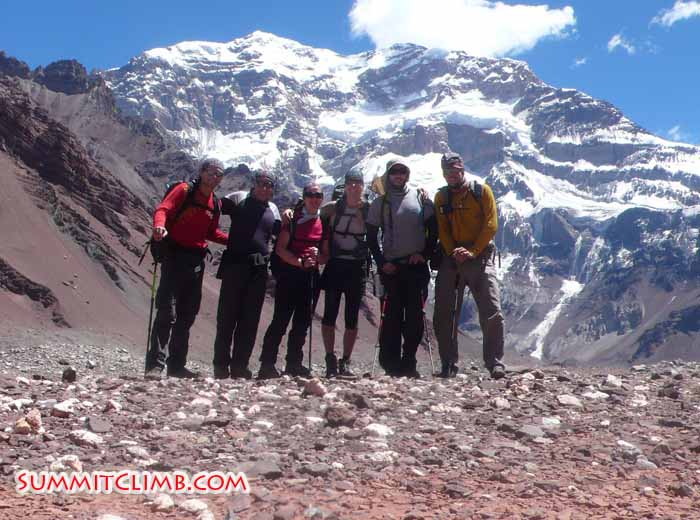 Our team along the trek to basecamp

Hi, this is the dispatch for the SummitClimb Aconcagua February 2013 Expedition. I’m very pleased to say that our expedition officially starts tomorrow. We are waiting for our Brazilian member who arrives today at 7pm.

The climate here is amazingly hot and all people are outside, having meals with their families and enjoying the warm nights. All the streets here have running water by the trees. Mendoza is pretty much an oasis squeezed between the Pampa Seca desert and the Andes. We can even see a few mountains from the highest parts of the city.

We are leaving Mendoza tomorrow early afternoon and sleeping at Penitentes, 2400m.

Thank you for following news at SummitClimb.com 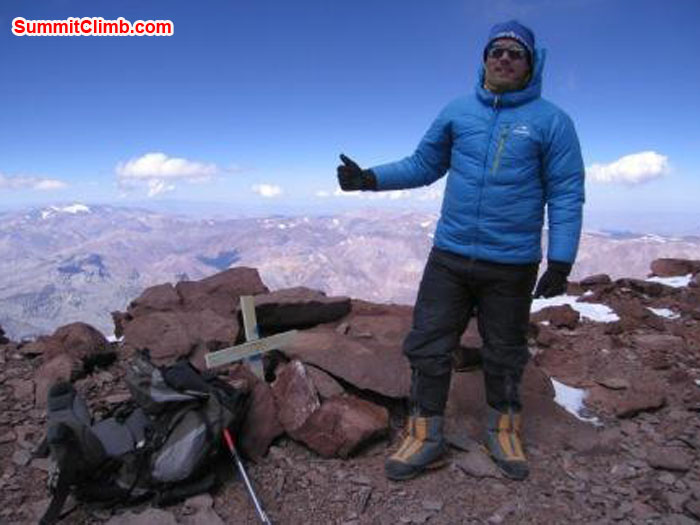 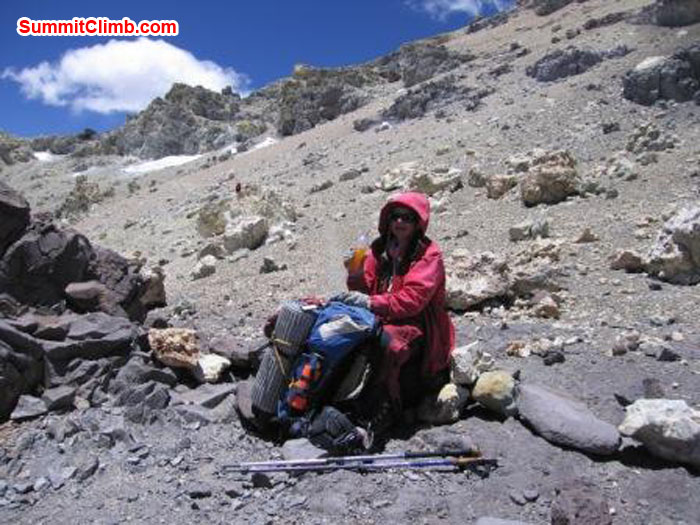 Team on the summit of Mt Bonete (Max Kausch).  Team member Jan having a drink on the trail. 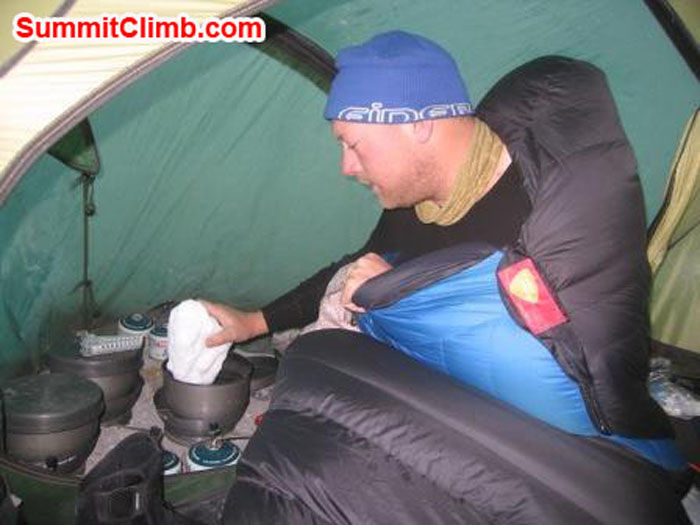 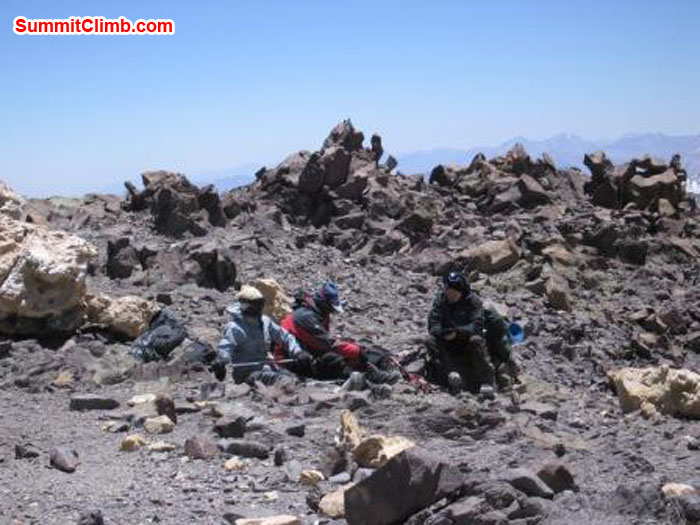 Arnold preparing breakfast in the morning. Group takes a break near Berlin on the way to the high camp.

On New Years day the team arrived in Colera at 5950 metres/19,500 feet and established our high camp there.

Upon arrival we received a weather update which looked good for 2 January, so we decided to push for the summit the following morning.

That night was windy and it was hard to get out of our tents early in the morning, but once we were on our way it was not so bad.

After a few hours we passed Refugio Indepencia at around 6400 metres/21,000 feet and we were doing fine. About one hour later the climb on the Candeleta started. This is a rocky couloir to the summit ridge of Acocncagua and the crux of the climb.

Unfortunately Adam and John decided to turn around at 6650 metres/21,800 feet. It was tough going because there was very little snow on the route. Mary and Denis pushed on and summited, followed by myself a bit later on. Jan also had a hard time and turned around at 6750 metres/22,100 feet.

Arnold. Back to top 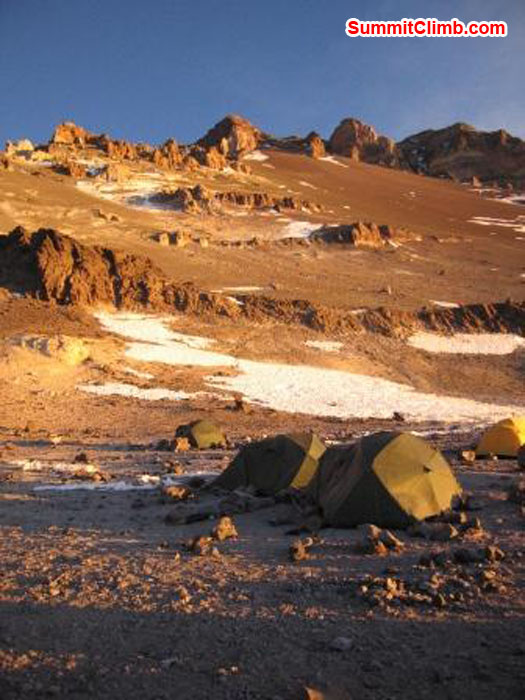 Today we climbed to Camp 1 Plaza de Canada again. This time it was a lot easier because of our better acclimatisation after resting another day in Basecamp Plaza de Mulas, and also because we did a carry a day before and our packs were a lot lighter.

Tomorrow a porter will meet us in Canada to help us carry our personal gear, this way we can move the next day to Nido des Condores at 5560m / 18,237 ft.

The weather looks good and we decided not to waste any time. Also this year it's a little bit drier than usual, so its a little hard to find water in camp Canada.

We will spend two nights in Nido de Condores and we hope to move on to Plaza Colera at 5970m / 19,582 ft on new years day. If the weather holds we might try to push to the summit the day after, but we have plenty of food to sit and wait if needed. 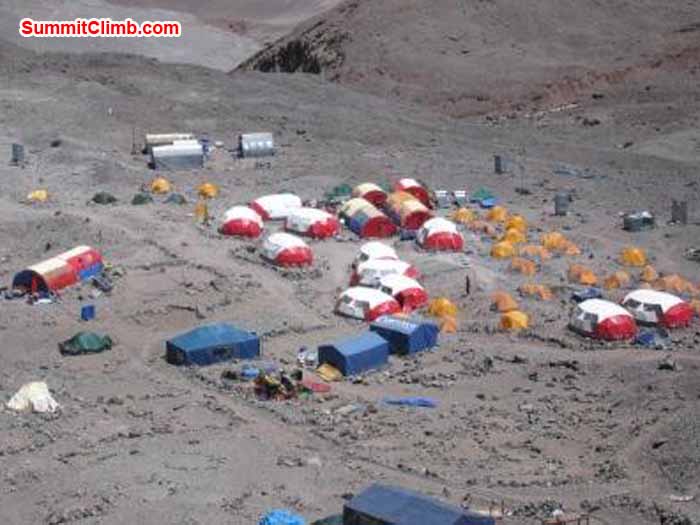 Our comfortable basecamp in Plaza de Mulas at 4300m. Team members John and Denis crossing some Penitentes near BC.

The team did well and we managed to pitch a tent and store some gear there. For many of us it was the first time to carry their own load up a mountain.

I had to help out some members, but eventually we got everything up there. Tomorrow we will do a small hike around base camp to get some more acclimatisation, before going up for a summitpush. 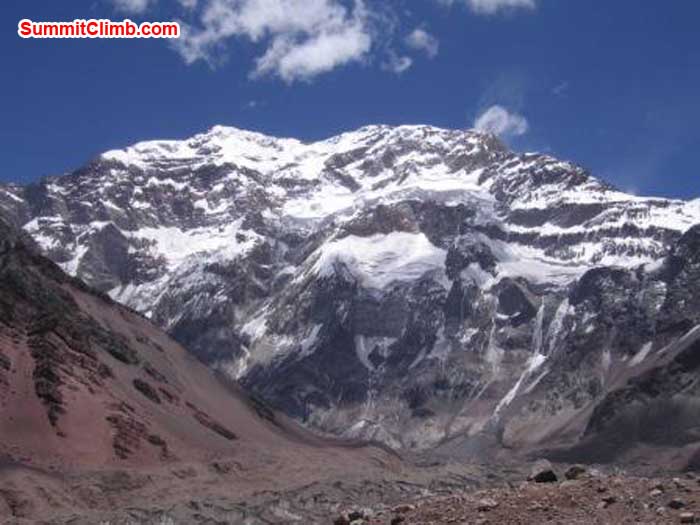 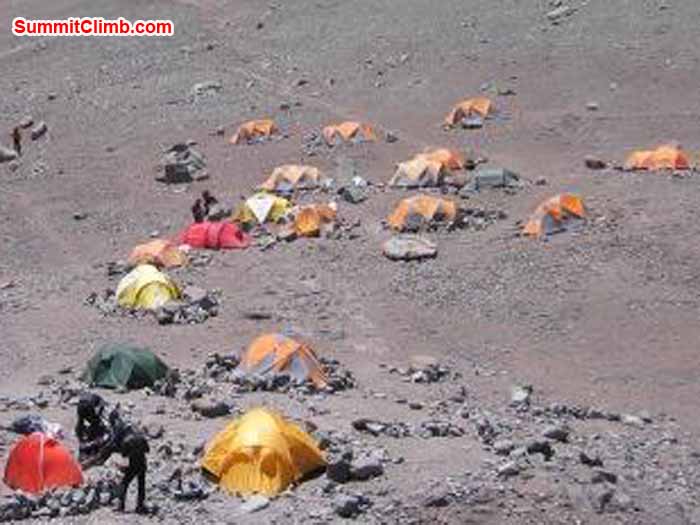 Before we went to this altitude we did a beautifull acclimatisation hike to Plaza Francia at 4250m / 13,940 ft, the base camp for the south face of Aconcagua, one of the biggest Alpine faces in the world. This view is amazing!

On the evening of the 25th our staff prepared a nice Chistmas meal with wine and champagne for us!

Today we will rest and tomorrow we will do a carry to camp 1 called Camp Canada.

The team is doing well and are happy to be here. 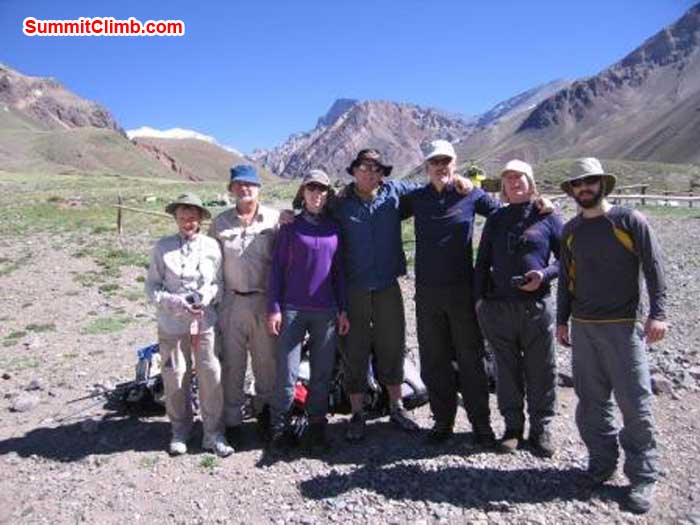 
Our Aconcagua team is slowly arriving in Mendoza. We have a nice international team again of all different ages and backgrounds:

I have been busy the last couple of days making sure all our gear for on the mountain is OK. Also I have been shopping for delicious food, so we stay strong and healthy.

Mendoza is a great place; Argentinians are laid back people who enjoy the good things in life, therefore there are hundreds of nice restaurants scattered around Mendoza. The food is superior here. It’s a nice place to relax before and after a climb like this.

The 22nd we will depart to Pentitentes at 2720m and then we will enter the national park the next day. From here mules will carry our equipment to base camp, but we will camp in Confluencia at 3320m and stay there for two nights for better acclimatization.

Arnold. Back to top