Here is what David says:

Good to hear from you, and thanks for all your work in helping make it possible for me to join the team in a customized way this year. It was an amazing, humbling, inspiring experience.

Sorry for the lengthy response below--

As far as my training goes, I did use an altitude tent (from Hypoxico) for about 6 weeks before the trip. However, I don't ascribe my success that much to the tent. There were other guys on the team who used altitude tents far more than I did. They used them for 3 months, and even got nitrogen tanks to further dilute the oxygen and take the simulated altitude all the way up to 29,000 feet level in some of their training, though not that high while sleeping. In contrast, I never got the simulated altitude above around 16,000 feet while sleeping, and I actually had to travel to Romania for the week before the expedition for work, so for the last 10+ days before reaching Tibet I was sleeping and training at sea level. Hence, while my altitude training may have helped, I don't give it a great deal of credit. 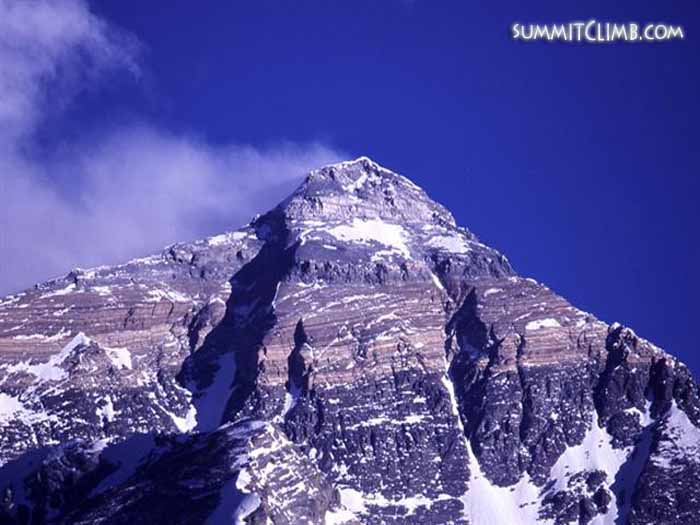 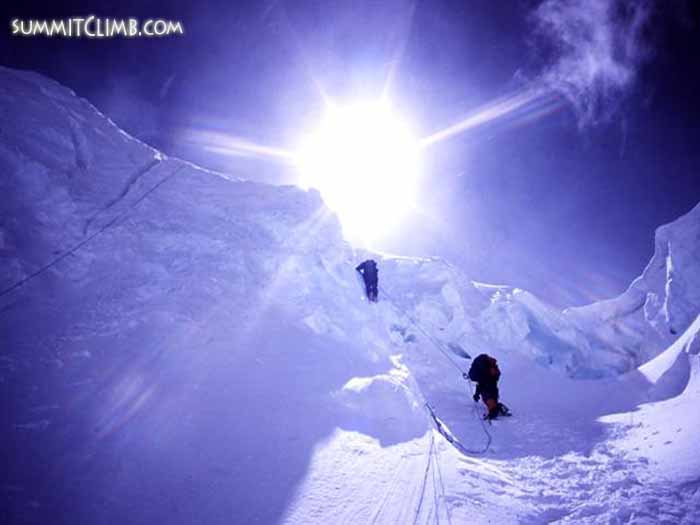 A great view of the North Face of Everest. Climbers ascending the North Col at 6,800 metres/22,300 feet. Photo Fredrik.

What I think differentiated my training from the rest of the group, and what helped me go fast on the mountain, was the intensity of my aerobic training before coming. I wanted to climb it without oxygen, and made it all the way to 8300 meters without using it, but at the urging of my Sherpa, and the team leader I took it for the summit push. With that goal in mind, I knew I had to train really hard. I was already in marathon shape when I began considering Everest in January, but then ramped my running and incline training much more. Since I live in a city, I did all my training on a treadmill. Before I came to Nepal, I was doing 60 minute runs at 10.4 mph and 2% incline, and 3 hour hikes with a 20 pound pack at 15% incline, resulting in almost 8,000 vertical feet of elevation gain in this workout. I also did 60 minute jogs at 15% incline, but without the pack, getting in about 4,500 vertical feet in an hour. These workouts were really intense!

And when I started hiking with my Sherpa on the approach, I was able to keep up with him consistently, and earned a lot of compliments from him on how strong I was. When I was high on the mountain, and gasping for breath for hours at a time, I was on guard for pulmonary edema, and I was glad my lungs had experienced that kind of air turnover intensity before.

My ascent was quite short--19 days from basecamp to summit, with just one rotation up the mountain. I struggled on two occasions with strong headaches, but drank literally 8 liters of water during the day and 2 at night, and luckily the headaches only lasted a few hours and I was able to adjust without going back down. I believe that I could have achieved my goal of climbing without oxygen if I had had just a few more days to acclimate.

By this point I felt for safety I should listen to the advice of those around me and take the oxygen. So besides the time being probably a little too short for acclimatization for a no-oxygen climb, I think the energy I spent beforehand also tipped the balances out of my favor. However, once I started oxygen at Camp 3, I was super strong and able to pass the line of climbers ahead of us when we left late that night.

For me, going in a short number of days was a necessity given my vacation time at work, but I also liked it because there was little repetition going up and down the mountain, and less boredom. As I mentioned above however, I think for my level of fitness it was just a few days too short to be able to climb the mountain the way I wanted. I want to go back again, and this time I think I will give myself several more days to rest. One mixed positive/negative was since I was only on the mountain one rotation, I didn't get a chance to go down and eat a lot of food to prepare for the summit bid. When I returned home I found I'd lost almost 15 pounds--this was almost all muscle. I had heard you need to force feed and that you lose your appetite, but didn't take the advice properly to heart. By the time I was pushing for the summit I'm sure I had already lost a lot of that muscle mass. Meanwhile the rest of the team had gone down to base camp and towns below and told me they just stuffed themselves for days. 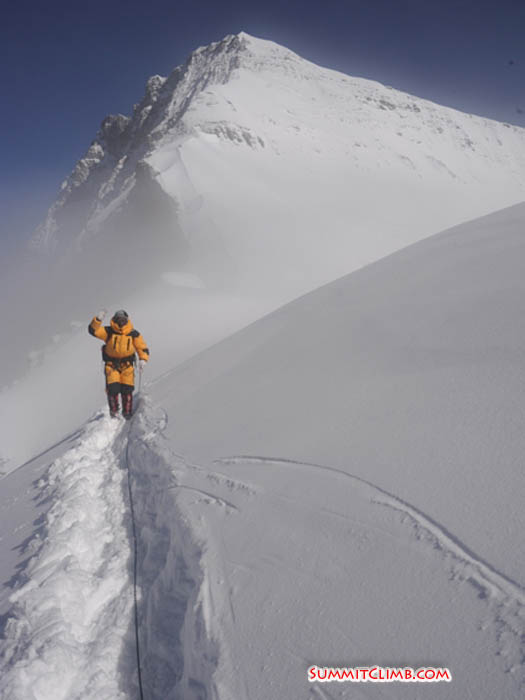 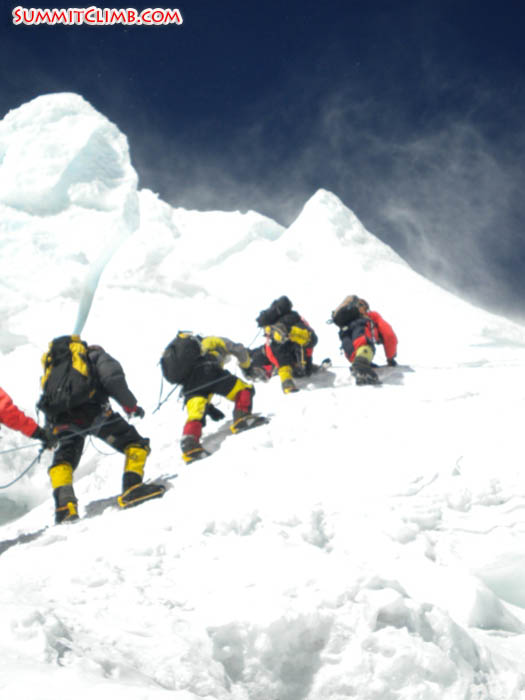 A line of Lakpa Gyelu waving to the camera on his way up the snow slope between camps 1 and 2 (Gordon Hopper). Climbers ascending the headwall towards North Col at 6600 metres (Thorbjorn Lundsgaard).

So, to someone else who wants to do it in a short timeframe, I would say the following: First, using an altitude tent should help, but it's important not to go overboard on it because pushing it too far interferes with training recovery, and I think aerobic fitness is more important than the benefit you can gain from spending only 6-8 hours a day in a hypoxic environment, and the rest with plenty of oxygen. Secondly, and most importantly, they need to be in superb aerobic shape, much better shape than your regular team member.

This is because when you cut the time down as much as I did, you are pushing your body right to the margin of what's physiologically possible for adaptation, and definitely increasing risk of altitude sickness. Third, I think it is very important to take the approach to base camp and ABC at a measured pace. It's very important not to rush your body during this adaptation process, because you really only have one shot at getting it right. You shouldn't stress about taking a few extra days either though, because if done right, you will have plenty of time before the summit bid. I took three nights at BC, because I didn't feel totally right on day 2 there, and so I had my Sherpa reschedule our porters for another day. Fourth, I would emphasize how important copious water consumption is during the acclimatization phase. I didn't take Diamox except when I got the headaches, but perhaps that would have helped more. I did take aspirin and vitamin C.
And finally, I would emphasize the importance of maintaining high calorie consumption because there isn't time to go back down and eat a bunch of food before the summit bid.

I would be happy to speak with anyone who is thinking of climbing with you and wants to go fast.

You asked me to give some feedback on my Sherpa as well. Overall, I thought he was excellent. He is very strong and an enjoyable, easy-going companion, who clearly has the right priorities on the mountain (safety). I would definitely climb with him again. One thing that was difficult for me was convincing him that I wanted to climb without oxygen, and that I wanted him to help build the patient strategy that would give me the best chance of that. He didn't believe it was safe--and I understand his position--and never really came around to understanding and supporting my position. I don't think he understood that I was okay with turning back and not making the summit, and would still pay him a summit bonus, if he or I decided it was unsafe. So I give him high marks despite a few quibbles. 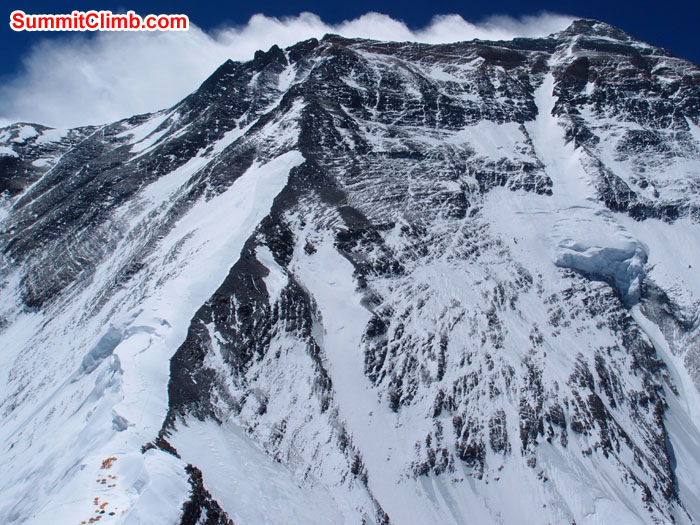 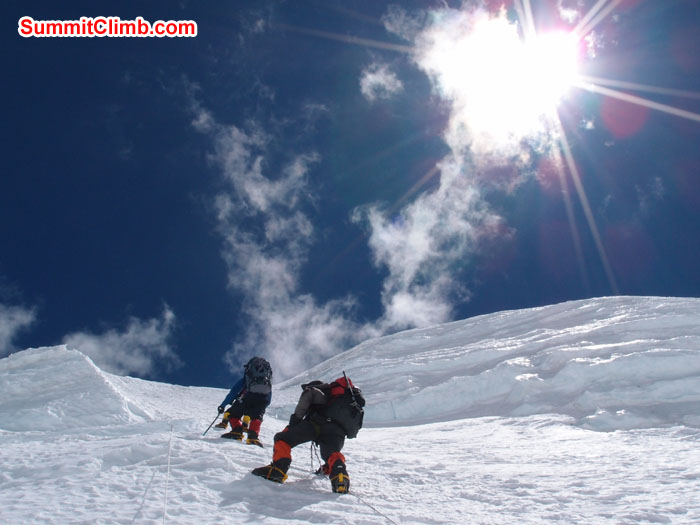 Last thing--I would like to come climb it again, and finish it without oxygen, hopefully next year if I can get off work again. I am interested in whatever repeat-member discounts you can provide, and thought I'd mention one other thing. I'd be happy to serve as an on-mountain resource to other climbers, and assist the Sherpas in guiding other members in any way it might be helpful (I am trained in wilderness first aid, and even cleaned and bandaged up a Sherpa when he cut his hand at the North Col, for example).
Perhaps we can discuss this as the year goes on.

Thanks, and thanks again to your office, the Sherpas, and the leader for making this trip an absolutely incredible experience,

David Back to top

What our clients say?