An anaerobic digester system is a large tank where microorganisms feed on a mixture of water and bacteria found in organic waste, breaking down the waste and producing two byproducts: methane, a renewable natural gas, and a pathogen-reduced effluent. 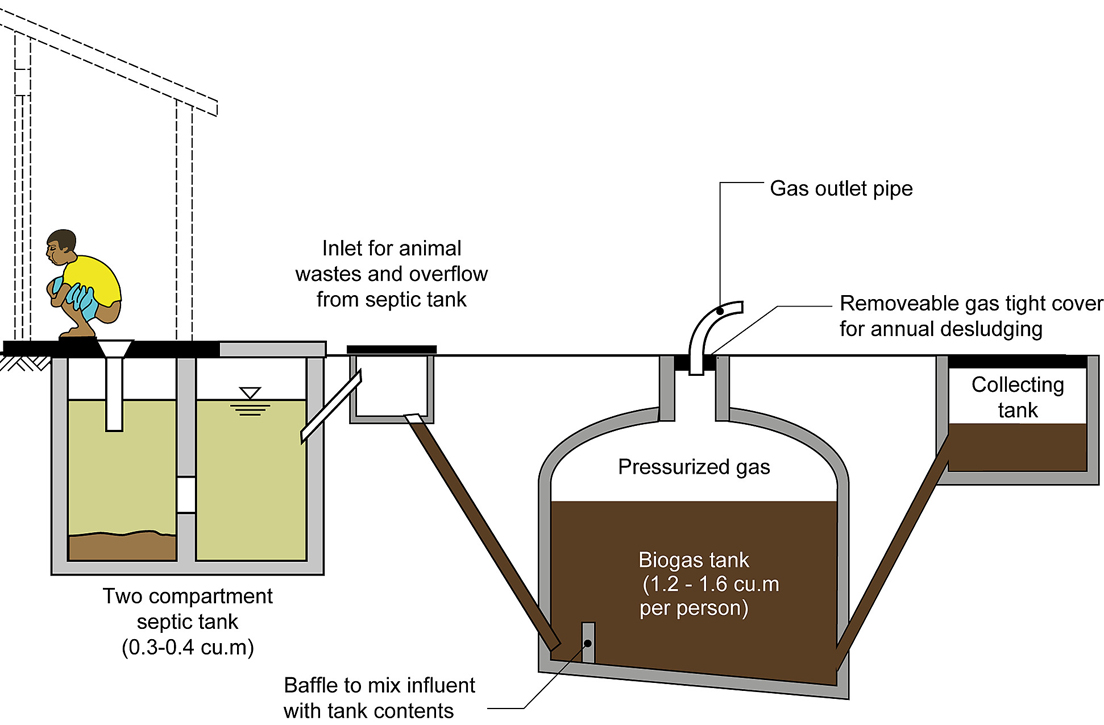 Anaerobic biogas digester technology is neither new nor unique, however standard biogas technology typically operates at low elevations and in warm climes — where bacteria can easily grow — and with a wide range of fuel including food scraps, animal and human waste.

Ubiquitous in many parts of central Asia, digesters have been broadly constructed as a sustainable waste solution throughout Nepal, China, India and other developing countries. China alone has an estimated 8 million anaerobic digesters in operations. The Biogas Sector Partnership is responsible for implementation of biogas technology across the country, including more than 260,000 biogas digesters constructed to-date.

Our Modified and Customized Technology

What is unique about the Mount Everest Biogas Project is twofold. First, it is a creative adaptation of existing biogas digester technology, re-engineered with customized modifications for operation in the harsh environment of high altitude, extremely cold conditions. 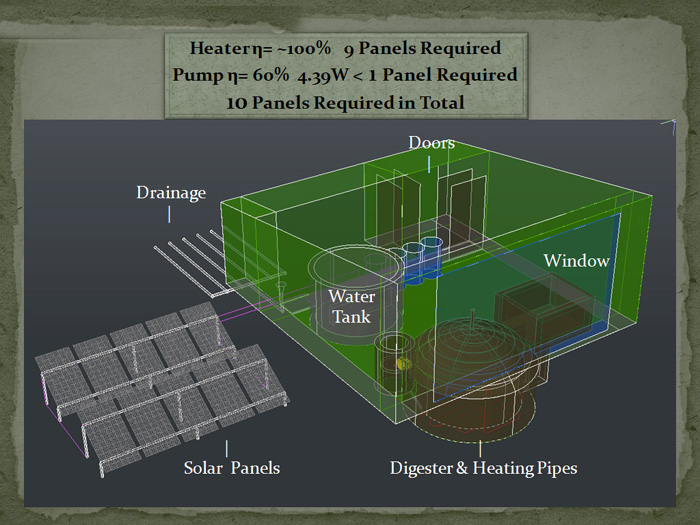 Mount Everest Biogas Project’s design concept was originally presented to members of the Gorak Shep Teahouse Owners Association and Biogas Sector Partnership in June 2013. Based on their inputs, the design was modified and the “Basis of Design” document was released in April 2015, a document subsequently vetted by the outside Seattle technical community. Once implemented successfully at Gorak Shep, the design can be replicated in other high-altitude locations. 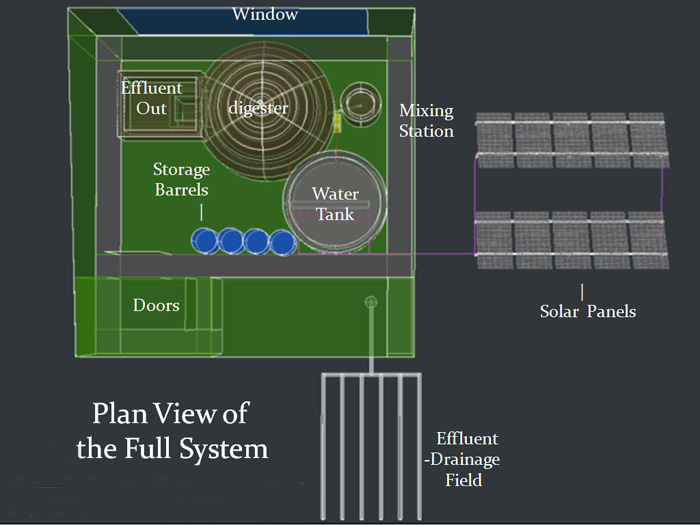 Mount Everest Biogas Project low technology solution combines the basic Nepali biogas digester system with a heating design and shelter that performs in the harsh atmosphere of Gorak Shep. With the core objectives of simple procurement processes and ease of construction, the system design incorporates components that are readily available in Nepal.

To maintain continuous operations, the digester must be fed daily — one bucket of excrement per day mixed with one bucket of warm water — and must maintain an internal digester temperature between 20°C – 30°C. Heating for the biogas digester is a major issue since average ambient air and ground temperatures are below freezing most of the year.

Although some heat from the slurry is lost to the air, the majority of the heat loss is through the walls of the reactor, to surrounding earth. This is a significant loss, and must be must be overcome for the biogas digester to break down the human waste, thereby maximizing the production of methane gas and minimizing pathogen effluent.

The design team has iterated several design concepts for meeting the active heating requirements of the biogas system. As the selected solution, a shelter over the digester will provide a controlled environment to elevate the ambient air and ground temperature and to warm or thaw stored water and waste products. To further minimize heat losses, the shelter roof is equipped with a night curtain.

Other design features include: an 8.5kW solar array for generating energy and 48 volt battery array for storing energy during the nighttime, a DC resistance coil inserted inside a well-insulated biogas digester buried in the ground, and a masonry building built over the digester as shelter 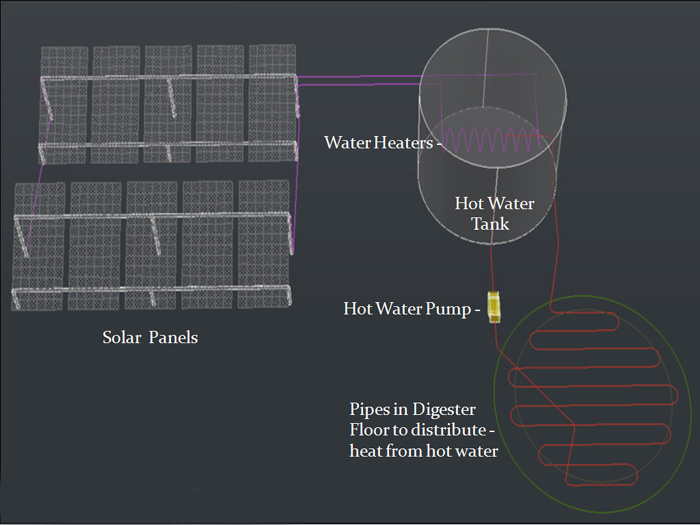 Through this design, Mount Everest Biogas Project will introduce new building techniques to local builders to make them energy-efficient and resistant to seismic forces. While the shelter will be constructed of traditional stone masonry, Mount Everest Biogas Project has incorporated rigid foam insulation below the foundation and in the cavities of walls and roof to retain the digester heat. Masonry combined with insulation is not a standard practice in Nepal, despite the cold climates.

Additionally, the shelter will include a new earthquake-resisting technique called “gabion banding,” which reinforces traditional stone construction with horizontal wire mesh bands designed to hold the building together when it experiences shaking forces. These new building techniques look to incrementally build on standard practices to create safer and more sustainable building models.

The design also includes a storage site outside the digester facility. Because the majority of climbers attempt the Mount Everest ascent in May of each year, most of the waste will arrive at Gorak Shep over a 60-90 day timeframe in the spring. The waste will need to be stored where it will not freeze so it can be fed into the digester over the remaining months of the year. 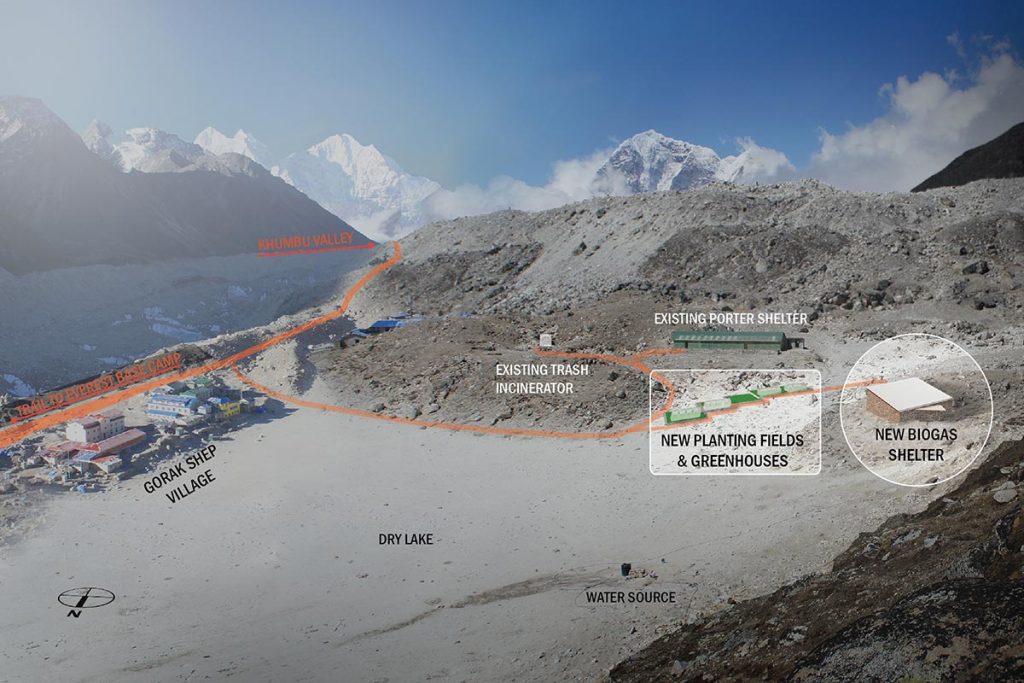 The scientific research and study required to complete the design of the Mount Everest Biogas Project has resulted from multiple academic partnerships. While biogas digesters are common in this part of the world, the MEBP digester will run entirely on human waste, which, at the outset, posed three scientific research questions.

First, human waste as the sole fuel input produces less methane than traditional biogas digesters that are fed with a diversity of animal and food waste. As such, scientific research was required to confirm that enough methane would be produced to successfully operate the project.

Second, climbers at Everest Base Camp often ingest antibiotics to manage travelers’ diarrhea and respiratory ailments. Important to consider in the system design were what impacts the prevalence of antibiotics would have on gut microorganisms required for natural decomposition.

Third, pathogen destruction by the digester needs to be measured to know if the effluent can be used safely as fertilizer for crops potentially consumed by humans.

To answer these questions, Mount Everest Biogas Project established a long-term relationship with the academic community of Nepal through a joint program with Seattle University and Kathmandu University. Beginning in 2015, the parties began running lab and bench tests simulating mini-biogas digesters operating at temperature ranges that mirrored the conditions at the site while using actual climber waste from Everest Base Camp.

The phase one technical report demonstrates by repeated lab testing at Kathmandu University that the human waste breaks down and produces gas. A pivotal moment in scientific testing of the design, this was a major risk reduction for the program. This critical lab result eliminates technical risk to the Mount Everest Biogas Project performance. Testing will continue with phase two, commencing in September 2017, to answer the third question in regards to pathogen destruction.