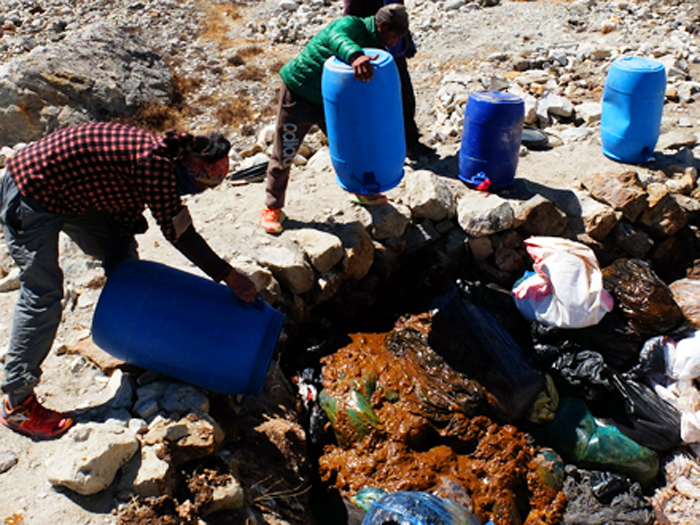 The successful 1953 summit of Mount Everest by Tenzing Norgay Sherpa and Sir Edmund Hillary pioneered a booming industry of climbing tourism in Nepal. The highest peak on the globe now serves as the ultimate challenge and lifelong goal for hundreds of expedition climbers each year.

Human waste (toilet) 22,803kg hauled from 650 toilets in Everest Base Camp to the Human Waste Pit located below Gorak Shep.

From 1953 to today, nearly 4,500 individuals from all over the world followed in the footsteps of Hillary and Norgay, summiting Mount Everest more than 7,600 times. 2017 was a record-breaking season; 375 climbers were granted a permit to attempt the summit, the most climbers in one year since 1953.

The launch point for climbing expeditions, Everest Base Camp (elevation 5,364m/17,598ft) sits on the Khumbu Glacier. For up to three months each year, this ‘tent city’ is a bustling temporary village, home to hundreds of foreign climbers and Sherpas seeking to summit. These months are spent acclimatizing as climbers prepare physically and mentally for the final 24-hour push to the tallest location on the globe, the Mount Everest summit (elevation 8,948m/29,029ft). 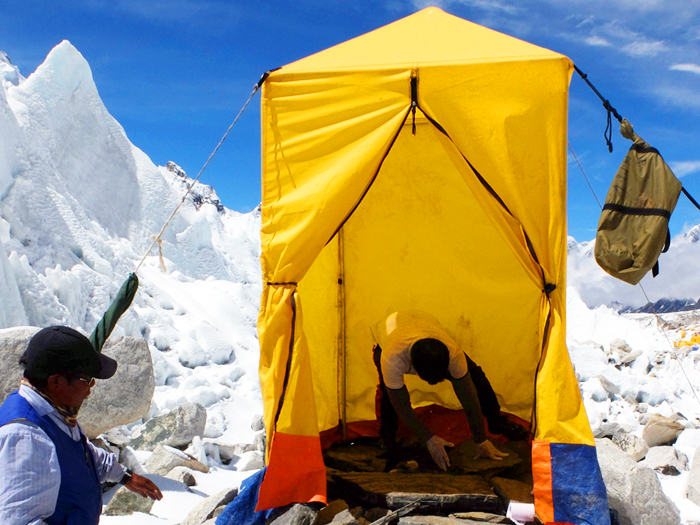 Impact: With decades of continued use and exploration, Everest Base Camp and the upper camps have become scarred by human impact. Human waste dumped in Gorak Shep has ballooned to 26,000 pounds (12,000kg/12 tons) annually, causing environmental degradation and posing severe risks to clean water sources.

Clean-up Efforts : In an effort to clean up this renowned landmark, the Nepali government enacted regulations in 1991 to mandate the removal of waste generated at Everest Base Camp. The Sagarmāthā Pollution Control Committee was created to manage the environmental protection of the Mount Everest National Park, which includes the oversight of waste removal and disposal. However, due to the remote nature of the area, there has been no solution yet for the treatment or safe disposal of human feces.