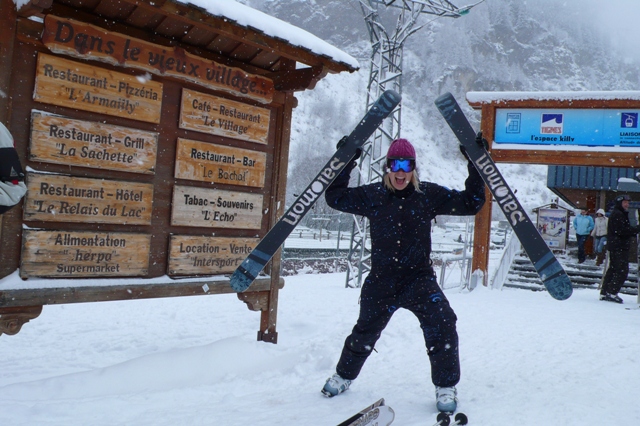 This is the news report from our free of charge no cost www.AlpsMeet.com , where new and old friends meet to learn about the Alps and share their experiences.

During the last week of February, we rendezvoused in Geneva Switzerland then took the bus up to Tignes Le Brevieres for a week of wonderful on and off piste (backcountry) skiing and boarding. The hospitality layed on by Kath and Mark and all of the staff at the Chalet Chardons was truly amazing. The snow was excellent and this ski centre is quite large, incorporated as it is with Val d'isere. It seemed there was always some good new and untracked snow to be found. Also we enjoyed some different tours in the Tarentaise mountains like Ste Fois and we even explored the Parc Vanois by touring with our skiis and split boards.

In the first week of March, we transferred across to the Chamonix Valley and stayed in La Tapia a kind of Gite - bed and breakfast run by the very charming Marie. We focused on practicing glacier travel and crevasse rescue technique for a few days, and even did some easy multi pitch ice routes down in the forest, then rode up the Aguilles du Midi telepherique cable car and walked to the base of the Cosmiques Arete, after which we had a fabulous day out on the ridge, climbing mixed snow and ice to reach the summit and a bivouac in the lift station until they opened, riding the first lift down in the morning.

A fabulous time was had by all and we sampled some of the finest Alpine hospitality, delicious food, fabulous snow and great climbing.

Hi this is Mike Browder calling from Tignes, France at the beginning of March for SummitClimb's Alps meet.

We've been having a great time here this week skiing on and off piste. There's lots of new snow, little bit of old snow and moguls, just a great time all around! Today we went and did something different-- ice climbing! It's been snowing a lot here but today was an absolutely perfect day. So we drove from Tignes up toward Val d'Isere, which some people say is the largest ski area on the planet. We went to this old road tunnel where there's a little hole in the center. If you walk right outside, then right there, above the hole, is this absolutely incredible waterfall. It's not too difficult, not too long, maybe 40 feet. We took some of the chalet staff and a few other people. We had Hailey, Kitty, Becky, Laura, Squash, Dan, and myself. It was absolutely incredible, with crampons on each foot and an ice axe in each hand. We had a beautiful view of the lake below and this whole region of France. Tomorrow we might go ski touring and maybe try ice climbing again on Friday at another little waterfall. 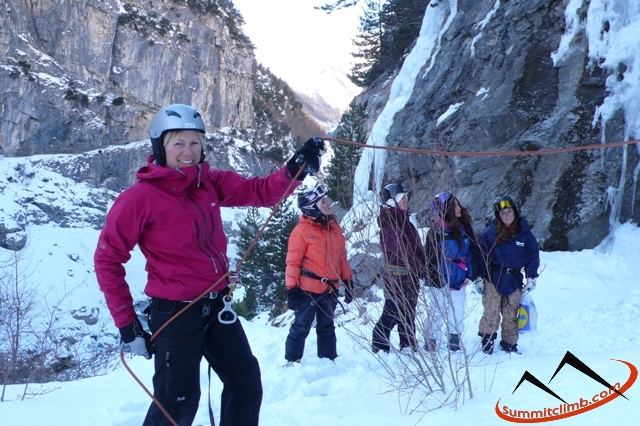 I want to thank Mark Hayman and the Chalet Chardon for their support -- Mark provided us with a lot of equipment today: crampons, ice axes, a rope of two, and some other things. Also, I'd like to thank Chris for the use of his car, without which we wouldn't have been able to get all of the Chalet staff to the beginning of the ice climb. Again, this is Mike Browder. Thanks for following the news from www.SummitClimb.com. Back to Top 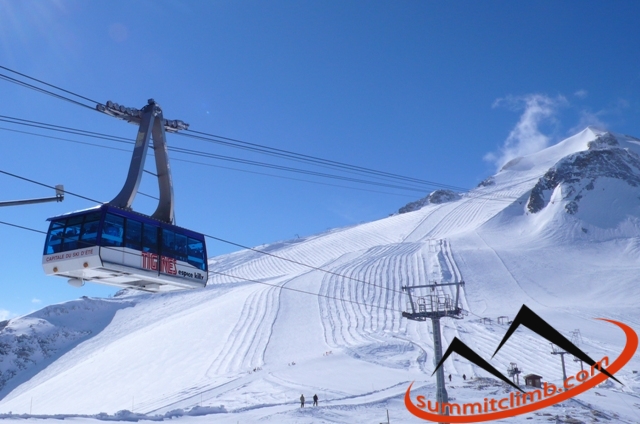 Hi this is Squash calling in a dispatch for the team's winter Alps Meet for SummitClimb. This is Sunday the 27th of February. So everybody arrived yesterday, we've got Mike Browder and his partner Gill, Chow, and Will. We all went skiing! It snowed for the first time in ages, we were in like two feet of fresh powder and it was amazing! And there was snow overhead and it was good, we had a really nice day out on the slopes.
When we got in I went out and did some hiking because I'm preparing for Everest at the moment, so that was quite lovely. Mike talked to me a bit about Everest because he's amazing and he's summited a couple years ago. Then we went down to a bar called The Underground, which is the best place to go here, and we had a wild time! The following day, I got up early and went skiing. Looking forward to sending some pictures, thanks for following this dispatch! 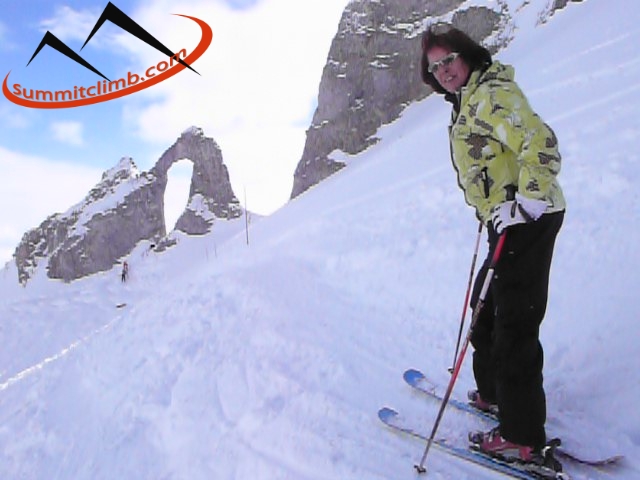 Jenny guides us to the Aiguille Percee, also known as the Eye of the Needle (Dan Mazur).
Ice Climbing in Val d'Isère:
Val d'Isère is located in the south east of France, known for its variety of difficult pistes and backcountry skiing. Mike Browder, Squash Falconer, and Dan Mazur met up with Kitty, Hailey, Laura, and Rebecca from the Chalet Chardons to take advantage of the superb ice climbing in the countryside. 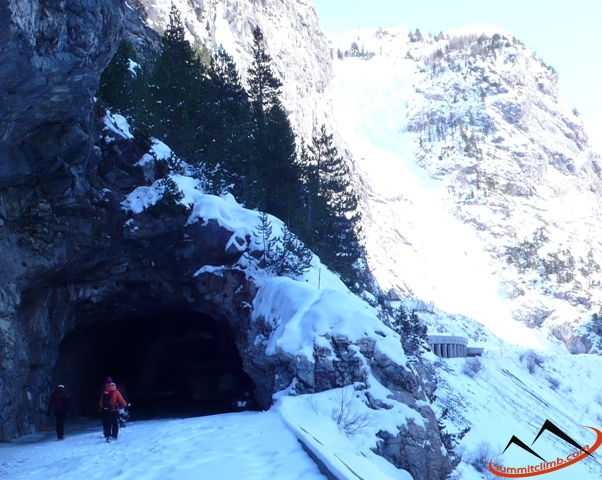 Skiing in the Alps is an outstanding experience, and SummitClimb offers the chance every year – for free. The ski season here lasts from December to May, and we began our February trip by staying at the Chalet Chardons, run by the generous Mark and Kath Hayman, located in the Tignes les Brevieres. This picturesque village is close to Val d’Isere and Tignes and gets a similar amount of snow, lending itself to superb on-piste and off-piste skiing. 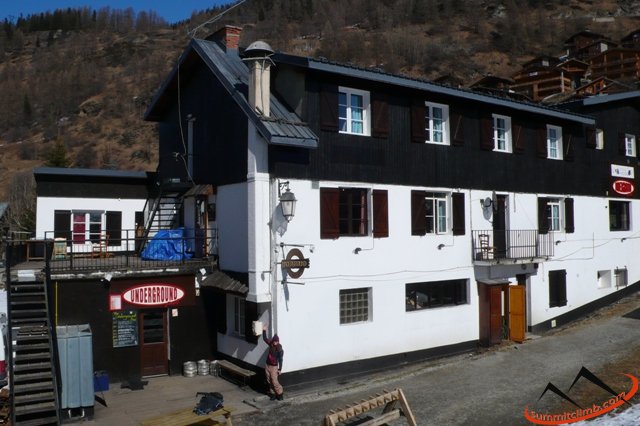 Becky hangs out in front of the Chalet Chardons, with the Underground to the left.

Off-piste skiing refers to skiing routes that are un-maintained and ungroomed. There are also no lifts to these areas, so skiers sometimes use ski skins (removable pieces of nylon fabric whose nap runs at an oblique angle, allowing the ski to glide forward, but not back) to help with getting around.

On-piste skiing means skiing the groomed runs at the resorts, sharing the runs with numerous other skiers and snowboarders, and riding the lifts for altitude.

One one day, our brilliant guide Jenny showed us the route to the 'Aiguille Percée’ or “Eye of the Needle,” an incredible natural arch that people ski through. 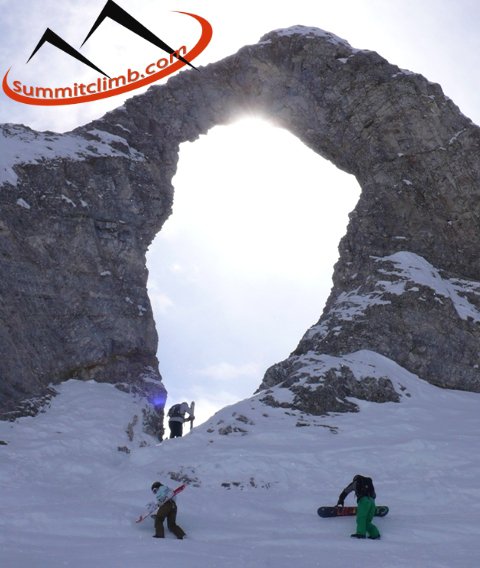 Skiers and snowboarders hike up to the Aiguille Percee

Après-ski is French for “after skiing” and refers to the socializing done after a long day on the slopes – usually still in your ski gear! For this year’s Alps Meet, the place to be was the Underground Bar Alpe d'Huez. As a local hotel puts it, “an electric atmosphere mixed with its cosmopolitan Scando-English clientele makes the Underground a memorable night.” Back to Top 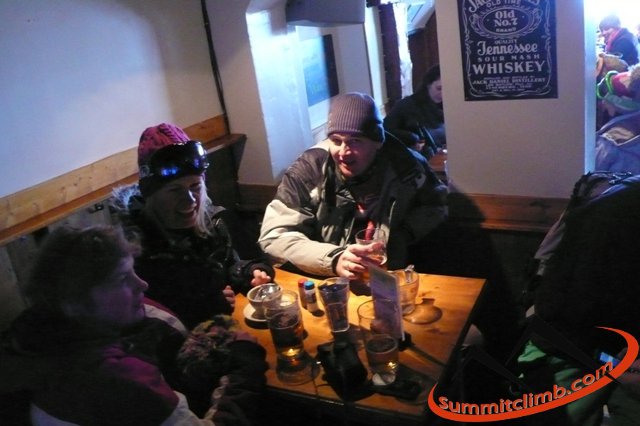 Katey from the Trois Tetes rock band, Squash, and Adam enjoying a bit of Apres Ski in the Underground